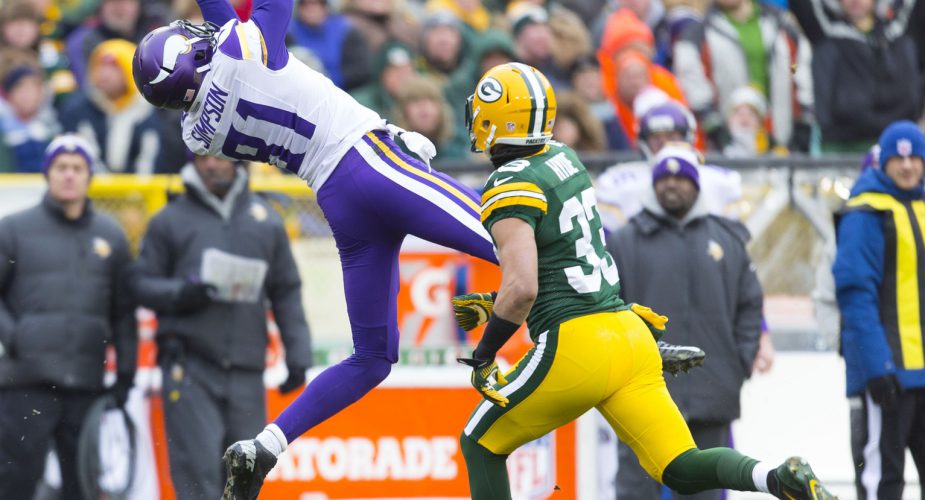 The NFL’s free agency begins on March 11 and the New York Jets have resources to be active in acquiring players. One position of need is receiver and while the Jets could pursue top free agent wideouts they might look at adding some veteran depth along with competition by signing second tier players.

Wide receiver Jerome Simpson (6’2″, 190, age 28) entering his seventh NFL season is coming off a solid year with the Minnesota Vikings having 48 receptions for 726 yards and is set to become an unrestricted free agent. Many will remember Simpson scored a touchdown by doing a flip over a defender into the end zone while with the Cincinnati Bengals.

Given his abilities and career thus far demand for Simpson should be higher than it is. Unfortunately off-the-field issues has limited interest in Simpson due to a 2012 sentence on drug charges while pleading guilty to careless driving and third-degree DWI in January of this year after a November 2013 arrest.

Simpson violated the terms of his probation from the earlier (2012) conviction and could face disciplinary action from the NFL regarding his recent guilty plea. There is no doubting the receivers abilities on the field but the uncertainty due to either a suspension or jail time does make signing Simpson a risk.

Acquiring Simpson would be the classic risk versus reward scenario as he could provide solid production at a reasonable salary. Simpson was suspended three games at the start of the 2012 season for violating the NFL’s substance abuse policy, so he could be looking at a second suspension likely 4-6 games. Even with losing Simpson for a portion of the season having his services for the remainder of the year might still be worth it if the price is right.

Obviously any team that signs Simpson is going to have to provide themselves with some protection as well as an understanding of where he’s at with the league along with the legal process but if Simpson can work through these issues with limited consequences he could be a real contributor at a bargain price.