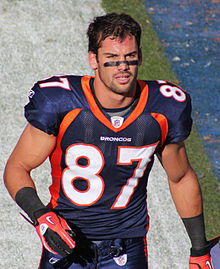 After a long day of negotiations the New York Jets have finally come to terms with wide receiver Eric Decker. The 27 year old Eric Decker played his first four seasons with Denver Broncos with plenty of success. In the past two seasons Decker was averaging 86 receptions, 1,176 yards and 12 touchdowns in each season.

Decker Agrees to Terms. Here is the Story: http://t.co/ceAyJ4ubAx pic.twitter.com/c9ZUWhq75W

Eric Decker will be receiving roughly $7.25 Million a year.

Even current wide receiver David Nelson tweeted Eric Decker with a congratulatory welcome to the team.

Welcome to the squad @EricDecker87 . Let's go get it

Jets Nation is fired up to have Eric Decker join the roster. He will help Geno Smith tremendously going into his sophomore season. There are talks that general manager John Idzik is also interested in signing wide receiver James Jones. We will keep you posted with any other roster moves that happen in free agency as well as the NFL draft.

Make sure you visit our New York Jets Forums to find out what the rest of Jets Nation is saying about this signing.