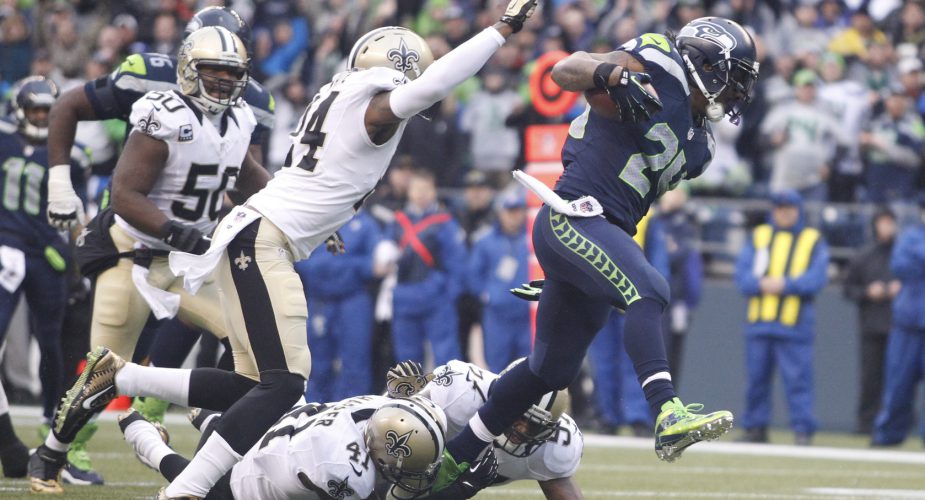 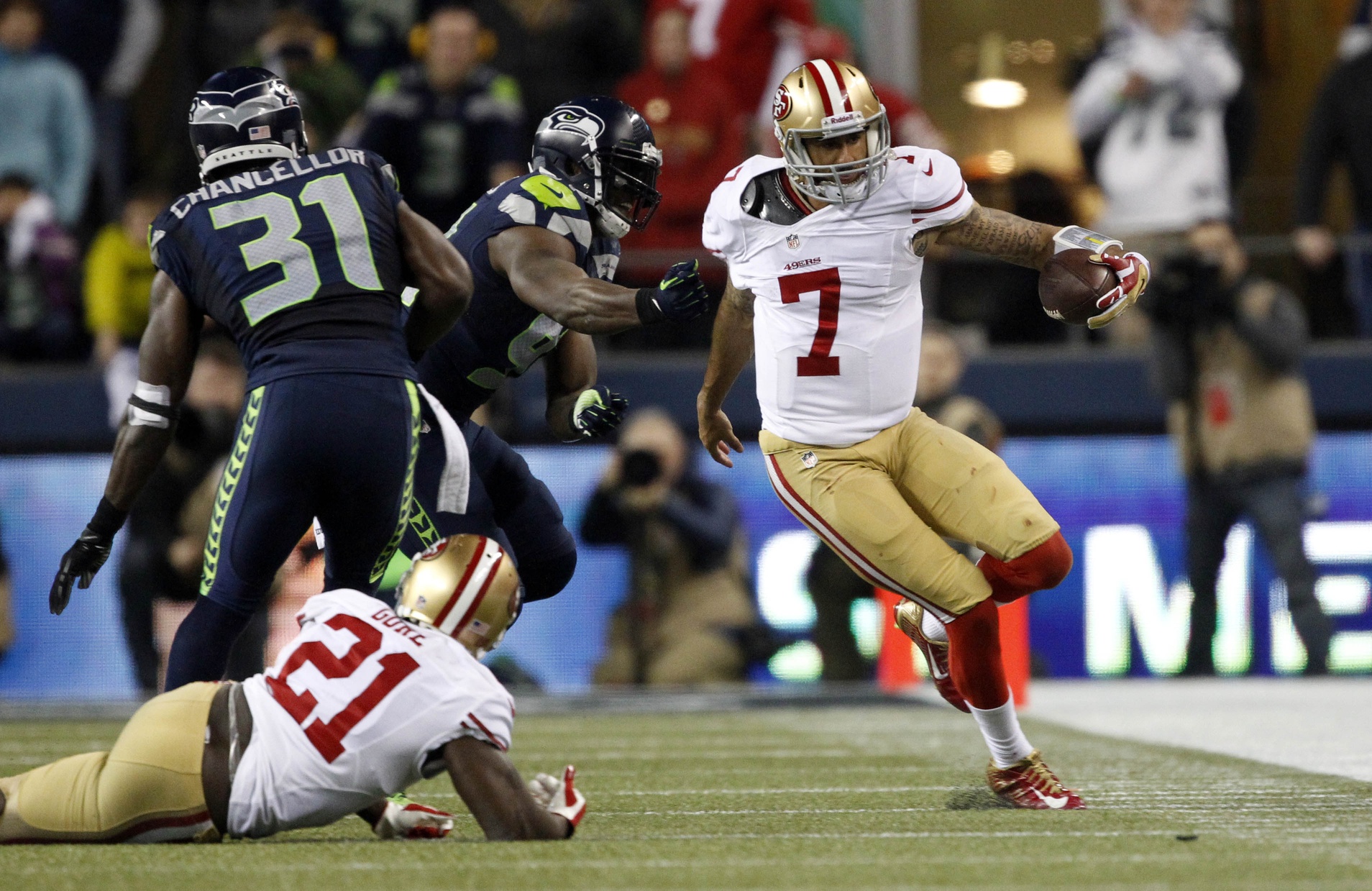 As NFL offenses turn to a spread concept and use of the zone read option defenses have been trying to figure out a way to combat it. A lot of teams have adopted the 4-2-5 (four down lineman, two linebackers, and either three safeties: one of which is a small version of a linebacker, and two corners or a traditional nickel look with three cornerbacks and two safeties). The premise behind this system is to help stop the zone read option game.

It’s always said in football that certain philosophies are “cyclical,” meaning the concepts always come back at some point. With only six people in the tackle box (from offensive tackle to offensive tackle on the defensive side of the ball), you have to start wondering if offensive coordinators are going to revert back to a power running game in an attempt to get the defense to change their look. A lower number of players inside makes it more likely to run the ball up the middle. Will we start to see more pistol formation with two backs and isolation plays called like counter trey or belly? It sure seems that this will be the next step for offenses to combat this new style of defense.

Most teams in free agency this year made it apparent that they are more concerned about stopping the pass than the run and rightfully so. Across the NFL quarterbacks threw for a total of 120,626 yards for the season, easily the highest in the history of the league. With teams like the New York Giants signing two free agent cornerbacks to go along with Prince Amukamura and other teams jumping at the opportunity to throw big money at defensive backs is evidence that defensive coordinators are trying to stop the passing game and make teams run the ball.

Here is why teams may look to run the ball more often against a 4-2-5 defensive alignment:

This is a break down of the Carolina Panthers rushing defense against the San Francisco 49ers and quarterback Colin Kaepernick in the Divisional Round of the playoffs last season. Observe the alignments of the defense: four down linemen, two linebackers and five defensive backs (DB), which are all circled below. Four of the five defensive backs are in quarters coverage, meaning they each defend 1/4 of the field. 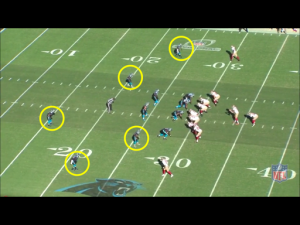 The circled defensive back below is called a “rover” or plus one player, here DB Captain Munnerlyn is playing this position. By using a rover in their defense the Panthers have an additional player on one side of the ball which the 49er’s can’t block. It’s a tactic to try and make the offense change their play at the line of scrimmage. 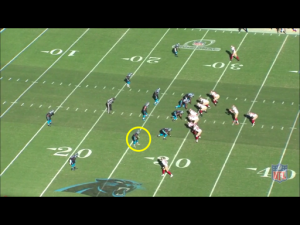 The 49er’s are going to run the zone read to the top of the screen and Kaepernick will key on defensive end Mario Addison #97(circled below). Addison is supposed to bend inwards towards the middle of the line of scrimmage and tackle Frank Gore because he’s unblocked, but he came upfield rather than bend towards Gore. The 49ers want to see Addison hesitate, and looking uncertain, since he is fearful of Kaepernick keeping the ball and running.  Addison moves slightly upfield instead of heading towards Gore, Kaepernick hands the ball off. 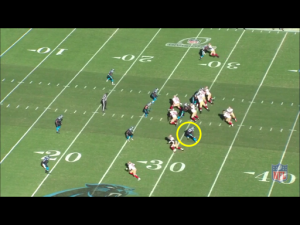 If Addison did the right thing and moves or bends to Gore (shown by arrow in the picture below), Kaepernick’s rule is to pull the ball and run with it towards to bottom of the screen. Normally, Kaepernick would be running free, but because of the “rover” (Munnerlyn), it eliminates the big gash runs he had in 2012. 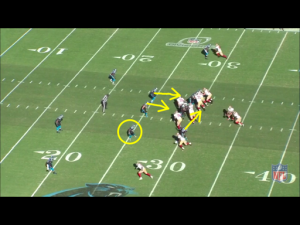 The linebackers have two entirely different reads from each other. Luke Kuechly (#59 arrow closest to bottom of picture) is reading the center. If the center steps to his right Kuechly will fill the backside “B gap,” two away from the center, shown in the picture above. If he sees the center step to his left, he fills the playside “A gap,” the gap on the shoulder of the center (below). 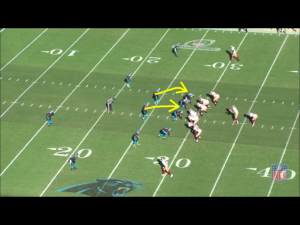 The “rover” Munnerlyn has two run responsibilities on this play. His first one is the tight end/flanker Vernon Davis. If Davis blocks down, Munnerlyn will fly up to the line of scrimmage ready for a bounced play or spill by Gore. 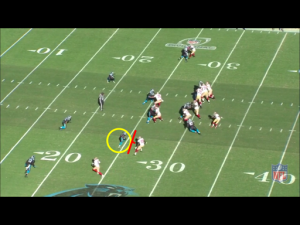 This is how the 4-2-5 alignment helps defend the zone read and also having five defensive backs in the game helps against the pass as well. More and more teams are going to this defensive scheme, so offensive coordinators are going to have to respond to it. This is why the ground and pound philosophy out of the pistol formation or even a traditional spread formation with one back in the backfield may make a comeback.

One of the reasons the Green Bay Packers drafted running back Eddie Lacy was to attack this particular defense. Although Green Bay does not run the read option their quarterback Aaron Rodgers is a tremendous passer, so they saw a lot of 4-2-5 to get another defensive back in the game to defend the pass. This left the defense susceptible to big runs up the middle. Lacy, at 230lbs, is a tough back to tackle and he is the answer to a team that may play six men in the box.

The 49er’s re-signing fullback Bruce Miller shows that the use of the this position is going to be vital for them in the upcoming season. Miller can line up in the backfield with Frank Gore or Kendall Hunter and lead the way in traditional power run game plays. There’s no doubt that the run game will start to come back as more teams adopt this scheme to stop athletic running quarterbacks or those who spread the field relying heavily on their passing game.

Obviously most fans want to see a lot of passing because it’s more exciting than the ground and pound game.  Unfortunately, most coordinators don’t care what the fans want.  They’re more interested in catching the defense by having more offensive blockers than the defense can handle.  It’s not the definite case that the ground and pound comes back, but the next step to solving this 4-2-5 defense would be power football.   However, with only 6 people in the box, this would be the next step.

It’s always a chess match between offensive and defense coordinators trying to get a leg up on their opponents and this will continue to be the case.