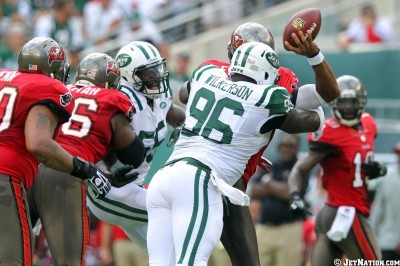 The New York Jets have exercised the 5th year option on Muhammad Wilkerson, which means that he is locked up through 2015.  This season he is scheduled to make a base salary of $1,200,500 and the price in 2015 will go to $6,969,000 (according to OvertheCap.com).  The Jets will work out a long term extension with Wilkerson eventually.  But Muhammad told a fan this week to be patient.

Be patient my time will come RT @TheBrianator: @mowilkerson Big Mo, whe. Are they signing you to an (cont) http://t.co/dMshamP3c1

If Wilkerson can be patient, we can do the same thing.  Jets fans are discussing Muhammad Wilkerson’s contract in our forums.