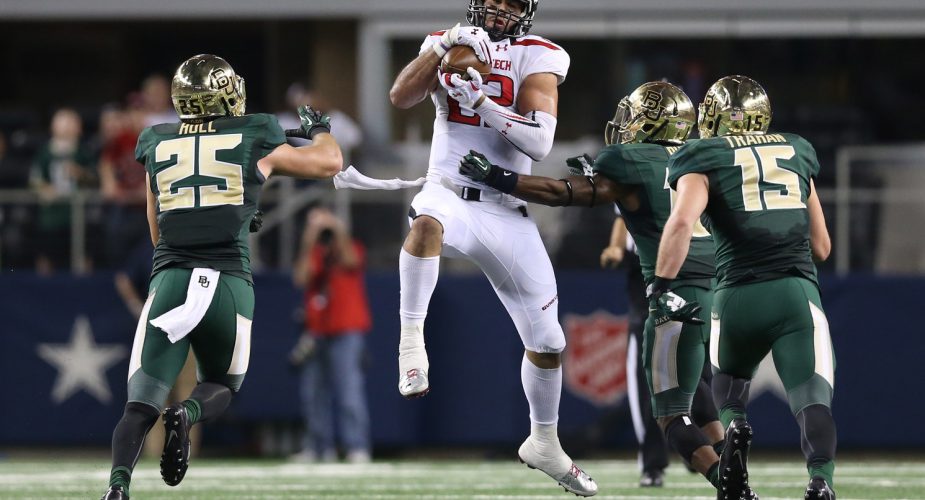 Here is the profile on Amaro from CBS Sports.com:

STRENGTHS: At 6-feet-5, 265 pounds with impressive straight-line speed (4.74 seconds). Lining up mostly in the slot, Amaro is a big, fluid athlete who uses his thick body to gain proper positioning in coverage and uses his large, soft mitts to attack the ball in the air.

He is a balanced route-runner and collects himself when changing direction with smooth moves to create separation. Amaro is dangerous after the catch and isn’t an easy ball carrier to bring down, running with power and toughness.

Played more of a slot receiver position in college and projects as a joker tight end at the next level.

WEAKNESSES: Lacks elite bulk and muscle definition for the position. Shows some ankle and lower body stiffness, lacking elite flexibility. Doesn’t have the softest hands and will have some drops off his palms. Allows his pads to get too high in his routes and needs to stay low and show better dip and body balance in his breaks – needs to do a better job hiding his intended path until the final moment.

Doesn’t always play up to his size as a route-runner and can’t let defenders knock him from his path.

Needs to develop a nastier demeanor as a blocker and improve his hand placement – will get caught holding. Room to improve his ball security when fighting for extra yards. Primarily an inside slot receiver in college and wasn’t asked to be a consistent inline blocker.

Some durability concerns after missing six games in 2012 after an upper body injury (grade-3 lacerated spleen) that caused internal bleeding. Needs to keep his emotions in check on the field – ejected from the bowl game in 2012 after punching an opponent. Some minor off-field character concerns after a March 2012 arrest for credit card fraud.

You can read more about Jace Amaro in our forums.