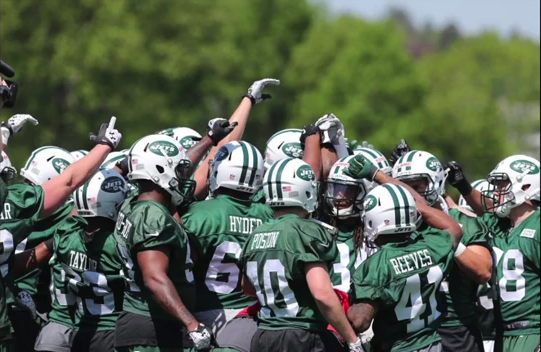 Here are some notes from NY Jets OTAs:

Rex on Mike Goodson, “Again, these are voluntary deals. I’m sure he’s rehabbing that knee.” Rex was asked if he has spoken to Goodson recently and he replied, “Nope.”

As we wrote when he was signed, Michael Vick is the Jets backup QB. Vick made headlines when he suggested that Geno would start if they played evenly in camp. Rex Ryan clarified this today as well, “Well, I think maybe let’s let it be a tie and we’ll see if it’s a true statement or not. Let’s let it play out and we’ll see at the end of the day where it shakes out. I’ve said from day one, I think Geno’s going to be hard to beat out and I’ve said that from day one. But I’ve also said that Mike’s going to have an opportunity to compete and he definitely will.”

Here is how the quarterbacks reportedly performed on the day:

Nick Folk also picked up where he left off, by ending practice with a 53 yard field goal.

Be sure to read more and comment on the New York Jets OTAs in our forums.