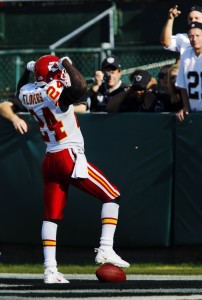 2013 Pro Bowl and former Chiefs cornerback Brandon Flowers was released on Friday. Although he made the Pro Bowl last year, Flowers had a sub par season by his standards, recording only 68 tackles, 1 sack, and 1 interception. It was apparent that it was a tough adjustment for Flowers to change to former Jets linebackers coach Bob Sutton’s new defensive scheme. Pro Football Focus had Flowers ranked amongst the top ten CBs in the league for the 2012 season, he fell all the way to 87 for 2013. Struggles aside, Flowers is still a high caliber corner and has 17 interceptions so far in his 6 year career.

Erika Esola, who was accurate about the Chris Johnson visit as well as his salary, says the Jets have already reached out to Flowers. According to Esola not only have the Jets reached out to Flowers, but Esola also said in her tweet “Expect Flowers to workout with the Jets this week.” Esola goes on to mention there were trade talks between the Jets and Chiefs in May about Flowers, but John Idzik shot it down.

The Jets have already reached out to Brandon Flowers, per local source. Chiefs – Jets tried to work out a trade in May but Idzik said no.

So from what I have gathered, expect Flowers to work out with the Jets this week. Also heard the Dolphins are interested in bringing him in.

With all of that being said, let’s go over 3 reasons why the Jets should and should not sign Brandon Flowers:

While there are arguments for both sides, what is evident is that the Jets could use an upgrade at the cornerback position, and are interested. Trade talks took place at some point in May, but just how much are the Jets and “Idzik the deliberate” willing to spend on Flowers? Flowers has a better track record than any cornerback on the Jets current roster, but would he fit in Rex Ryan’s defensive scheme? At this point there are still many questions to be answered, what do you think?

For more information on the latest Jets news stay tuned to JetNation, and be sure to read about Brandon Flowers in the forums for further discussion.