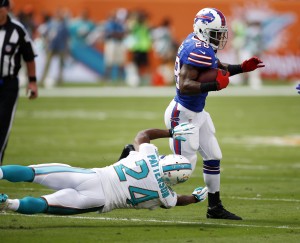 The AFC East race hasn’t been too competitive in quite some time. The New England Patriots have captured 10 of the past 11 and 11 of the past 13 AFC East titles behind their one big constant: Tom Brady. With Brady entering the twilight of his career and the rest of the teams getting younger and more talented, the Pats’ dethroning is near. But, because he is Tom Brady and because he’s still the quarterback, it’d be hard to pick the Jets, Dolphins, or Bills over the Uggs spokesperson just yet.

1. New England Patriots, 10-6: It’s hard to not focus on Brady too much because he has the potential to become the undisputed greatest QB of all time with another ring and he has one giant obstacle in his way in the Denver Broncos, but the truth is, over time, this team has become so much more than just Brady. The three-headed rushing attack of the lead back, Stevan Ridley, the change-of-pace back, Brandon Bolden, and the “Joker,” Shane Vereen, has turned New England into a power-running team. Heck, that offense even made LeGarrette Blount (no longer with the team) a star. These guys will be a headache for whoever they play, but the real key is the receivers. Danny Amendola and Rob Gronkowski are both big-time targets – if they can stay healthy. Julian Edelman was Brady’s only consistent and healthy target last year, and that wasn’t enough to make it to the Super Bowl. A lot is riding on the development of Kenbrell Thompkins and Aaron Dobson. On the other side of the ball, the front seven has always been fearsome. Vince Wilfork and Rob Ninkovich are still there, but it’s young guns like Chandler Jones and Jerod Mayo that really add some bite to the Pats’ D. Of course, the biggest upgrade is Darrelle Revis at corner, and if he stays healthy, this defense could be one of the best in the game. Injuries hurt New England last year, but they hurt everyone. It’s hard to say just how far this team will go, but with great coaching, the addition of Revis, and, of course, Brady, a sixth AFC East championship should be in their future.

2. New York Jets, 9-7: Quarterback is the most important position in the NFL, but for the Jets, the decision they make in that area could very well be the difference between playoffs and hitting the golf course. Geno Smith, despite his barrage of turnovers, played well last year, and led an offensively inept New York team to eight wins. However, if Gang Green wants to play extra football, they’ll need Michael Vick to start and stay healthy. Vick is simply a better QB at this stage of the game with loads of experience. He’ll also have a flurry of new weapons, including Eric Decker from Denver, Chris Johnson from Tennessee, and Jace Amaro from the draft. A lot will depend on how well these players play in their new roles, but they are no doubt upgrades. Decker goes from being the third or fourth Bronco mouth to feed to having to deal with the opposing team’s top corner every game. Johnson will have it a little easier, staying fresh by splitting carries with Christopher Ivory and Bilal Powell and continuing the Jets’ tradition of a strong ground game. That will help Vick a lot, who will make the offense more diverse with his arm and his legs. Defensively, it’s all about the secondary. Muhammad Wilkerson and Sheldon Richardson are going to be very disruptive, among other names. However, Dee Milliner, who struggled in his rookie year, is going to have to be the team’s No. 1 corner, while Calvin Pryor, the team’s first rounder this year, will likely start at free safety. A young and unexperienced secondary is going to need to have a lot of pressure taken off of them by the pass rush. Last season, at 6-8 and out of the playoffs, the Jets had a decision to make: finish the season out strong, win the last two games, and preserve Rex Ryan’s job or mail it in, go 6-10, and see Ryan on the unemployment line after season’s end. They chose the former, which is a good sign for the locker room atmosphere. It’s also another reason why, as a wild card, the New York Jets have a very real shot to return to the playoffs.

3. Miami Dolphins, 7-9: Despite all of the controversy surrounding Jonathan Martin and Richie Icgonito, Miami had a good shot to make the postseason. However, if they want to actually get there, they’ll need Ryan Tannehill to make the leap. Tannehill has performed better than many expected when he was considered a reach as eighth overall in the 2012 draft. After throwing for nearly 4,000 yards last year, Tannehill might ready to break out, but aside from his two deep threats in Mike Wallace and Brian Hartline, he’s someone short on targets. The Knowshon Moreno experiment is going to be a barometer for this team. While Moreno has been fantastic the past year or so, part of that may be because he was in a Peyton Manning-led offense (and had good health). Moreno has to prove himself to be a true lead back in Miami and stay on the field. The Dolphins D is a solid group, led by the vicious Cameron Wake on the front four, as well as Dannell Ellerbe and Phillip Wheeler in the middle. However, the big free agent acquistion was Cortland Finnegan, who will team with Brent Grimes to make one of the more scrappy and difficult corner tandems in the league. Overall, the Fins are solid, but somewhat vanilla. Tannehill has the cannon to get the ball to Wallace and Hartline, but unless we see a big development from him this season, as well as from other players, Miami fans might just be counting down the days until basketball season (if LeBron stays in South Beach, of course).

4. Buffalo Bills, 5-11: The excitement surrounding Sammy Watkins in Buffalo is real, especially when one thinks what kind of tandem him and E.J. Manuel can become in three years (or less). But there will be growing pains for both players this season, especially since the Bills made the head-scratching trade of Stevie Johnson, when he could have been both a mentor and a partner for Watkins. Expect Watkins to excel, especially with some help from offseason acquisition Mike Williams, but the best is yet to come. Head Coach Doug Marrone also has to figure out the best ways to utilize the talents of C.J. Spiller. Fred Jackson is an adequate back, but Spiller is far too big of a playmaker to not be getting more touches. The defense was a bright spot for Buffalo last year, thanks to Mario Williams, Marcell Dareus, and rookie Kiko Alonso. Their production, combined with the development of Stephon Gillmore and the experience of Leodis McKelvin, should make the Bills D an area of strength once again. Getting Watkins was huge, especially for the development of Manuel. However, this wasn’t a one-year fix, and the postseason is still a whiles away for Buffalo fans.