The Jets are undergoing a full youth movement this season in the secondary. Hopefully for the Jets this youth movement will turn out the same way their defensive line youth movement went over the past few years. The Jets have three young 1st round picks on their D-line and linebacking core, and three young 1st round picks at cornerback and safety. Coincidence or pattern? Although the Jets secondary is young, the talent is definitely there. If the Jets secondary can get on the same page in training camp, they could be a special group to complement the dominant front seven on defense.

Although the Jets have three 1st round picks potentially starting in the secondary this season, that doesn’t guarantee success. The Jets secondary will have to get familiar with each other, and be on the same page by the start of the regular season otherwise it could be a weak point for the Jets this year. The Jets ranked 22nd in the league last year in opponent passing yards, and only had thirteen interceptions, which is relatively low for a Rex Ryan defense. The Jets secondary will also need to do it’s best to stay away from the injury bug. Training camp will be crucial for the chemistry, and conditioning of the Jets defensive backs. 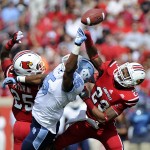 The only locks to start in the secondary are Dee Milliner and Calvin Pryor. Wilson and Allen are subject to losing their spot and will be pushed in training camp. Patterson was brought in to start opposite Milliner, but if another player really steps up in camp one would think his spot could be in jeopardy as well. The Jets will have a very young, but also very talented secondary this year. Three of the five projected starters are 1st round draft picks.

The Jets have eleven cornerbacks, and seven safeties on their roster. There is a good chance they will keep seven corners instead of six, but with all the emphasis the Jets are trying to put on offense they could end up keeping an extra wide receiver instead. Dawan Landry has been seeing a lot of time with the second unit, and it seems almost inevitable that he will be replaced by the youth movement. There will be some big decisions to be made regarding the secondary before the season begins, the answers will begin to surface at training camp.

These 3 players will have a tough time making the 53-man roster, but they all have the ability to stand out in camp. Ras-I has impressed Rex Ryan so far, and is a Patriots “cast-off” as Ryan would say. Ryan would love nothing more than to stick it to Belichick with one of his ex-players. Dixon was a Jets 6th round pick in the 2014 draft, and John Idzik likes to keep as many of his picks as possible. Dixon also has good play making ability, but he will be facing a very uphill battle and will have to stand out in training camp. Josh Bush was a 6th round pick by the Jets in the 2012 draft, and would make a good depth player.

These five players have little to no chance to make the 53-man roster, and will most likely become practice squad players. With eleven cornerbacks, and seven safeties going into training camp Idzik will get his coveted “competition,” unfortunately for these players though they will be cut casualties.

The Jets are fully invested in sophomore cornerback Dee Milliner, and expect a huge leap this year. Milliner came on strong at the end of the season last year with three interceptions in two games, but struggled for the majority of the season. The Jets are hoping a full offseason will be just what Milliner needs to take the next step. Milliner missed last year’s offseason due to a shoulder injury that hindered his development. This is a huge year for Milliner, and the Jets have high hopes for the 2nd year corner.

Many people questioned the Jets 3rd round selection of Dexter McDougle out of Maryland. There were more tantalizing, and higher ranked choices still on the board but the Jets committed to their man who “plays like a Jet.” McDougle had an award named after him, the “Dexter McDougle Ultimate Team Player Award,” and was the first recipient of the award. McDougle’s award is now an official award at Maryland that will be given out each year to the team leader. Aside from McDougle’s leadership qualities, his play also impressed the Jets. McDougle had six interceptions in his college career, and three of them came his senior year when missed the last nine games. McDougle could end up being a smarter pick than most critics originally thought.

Calvin Pryor was selected 18th overall by the Jets in the 2014 draft. Rex Ryan expects big things from the rookie safety, saying: “There’s going to be a lot of jerseys sold with Pryor’s name on the back, because I have a funny feeling he’s going to become one of the more popular Jets as this thing gets going.” Pryor earned the nickname “Louisville Slugger” for the massive hits he inflicts on receivers. Pryor is regarded as one of the most physical players coming out of the draft, and will be labeled as an “enforcer” going into his first season in the NFL.

You can read more and continue the conversation in our New York Jets forum.