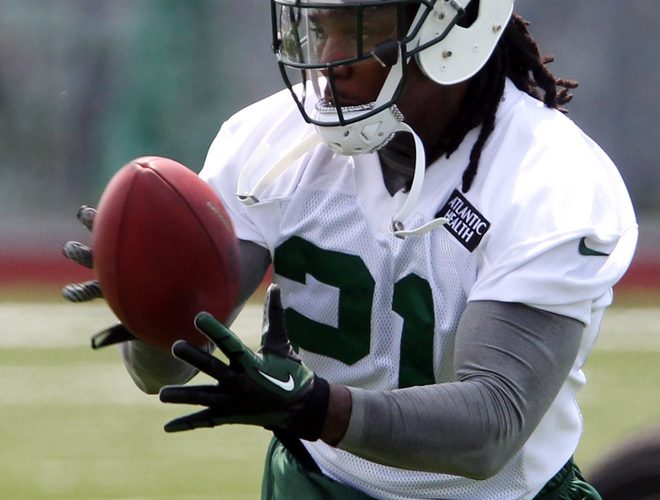 Here is what you should take away from the first day of training camp.

When the players made their way onto the field and began warm ups both Kerley and Hill started their day on the stationary bikes, as I mentioned on the JetNation twitter account yesterday.

Although they began camp on the bikes, they did participate in every drill throughout practice and seemed healthy. Willie Colon and Antwan Barnes sat out the first day, as everyone expected; They have been placed on the PUP (Physically Unable to Perform) list. Chris Ivory sat out of team drills with a pulled hamstring, which coincidentally happened last year as well. Rex Ryan didn’t seem too worried about Ivory though. Rookie Quincy Enunwa hurt his hip early in practice, and didn’t participate for the rest of the day. Nick Bellore also injured his hip early in practice, but ended up participating again towards the end of the day.

Everyone has been saying how the Jets offense is “light years” ahead of last year’s offense, and I can attest to that having seen it in person. Both Eric Decker and Chris Johnson looked great. Decker didn’t drop anything thrown in his direction, and ran very crisp and clean routes.

Chris Johnson was also very impressive, he was speedy, and elusive. Johnson was even flexed out at the wide receiver position for a couple of plays to show off his speed. The only negative for Johnson was one fumble, this should be expected though as he hadn’t seen the field most of the spring and summer, and still needs to knock off the rust. The rest of the offense looked clean as well. Both Geno and Vick started camp in great fashion, but it was Geno who ended camp on a high note. Since I was busy trying to get other information up on twitter, and had to do some moving around I wasn’t able to get the exact stats. Brian Costello had the numbers for both Geno and Vick though:

Obviously with more reps Geno is going to have more opportunities to put up better numbers. David Nelson, who also looked great day 1, stated how much Geno has improved and how he’s “acting like a starter,” by saying “I see that when he’s in the huddle, I see that whenever he’s calling plays. I see the way he has ownership and command over the offense.” Out of the rest of the wide receiver group, the two wideouts who separated themselves were Kerley, and Nelson. Both rookies, Jalen Saunders and Shaq Evans, had drops at some point but Saunders looked much better overall. Keep an eye on Jacoby Ford who impressed on his first day at camp.

It will be very interesting to see who gets the nod for the starting spot opposite Calvin Pryor in week 1 of the regular season. Rex was using a rotation of Pryor, Allen, and Landry with the starting unit. All three of the safeties looked pretty good on their first day of practice, Landry almost had an interception on a overthrown pass by Geno.

Whoever ends up losing the starting job will most likely still see a good amount of time on the field. Jaiquawn Jarrett had an interception off a pass that was tipped, he will have to push for playing time with more plays like that one. The secondary wasn’t as sharp as the offense, giving up more than a few big pass plays. Dexter McDougle had an interception on the last play to close out the day.

The Jets newest player, Jason Babin wasn’t at camp on the first day because he hadn’t signed his contract in time to make it. Oday Aboushi was at right guard for Willie Colon, and Brian Winters was at left guard while it was the other way around in minicamp. Jeff Cumberland wasn’t at camp for personal reasons. Willie Colon could be cleared for camp within the next few days, while Antwan Barnes will be out for a more significant period of time.

Rex Ryan had the team fired up with his annual speech before training camp began, rookie Tajh Boyd said of Ryan’s speech: “You could just feel the fire burning inside the guys. He made me want to run through a brick wall.” Football is back, and you can be sure there will be many more exciting stories coming out of training camp.

Here is our day one discussion thread on NY Jets training camp.