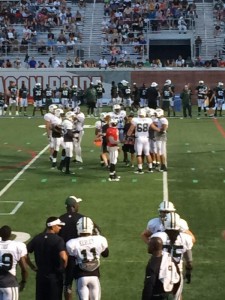 CORTLAND N.Y.  – Saturday night was the Jets’ annual green and white scrimmage at SUNY Cortland. Here is a recap from the night.

The night started off bad for the offense, with the first play from scrimmage going for a two-yard loss. It didn’t get much better from there, as the “improved” offense only managed to score three field goals in the 90-minute scrimmage and only passed the 50-yard line a handful of times.

JetNation Forum member 124, also known on Twitter as @L7Panda said it best; “the fireworks at the end of practice” were the biggest explosion of the night.

Almost the certain starting quarterback, Geno Smith, finished the night 7-for-14 for 84 yards. About half of that came of a 41-yard strike to Stephen Hill in the “first half” of action.  Smith saw pressure all night, as the first team offensive line could not hold their own against what is believed to be one of the top defensive lines in the league.

Smith should have been intercepted on at least two occasions, but lucked out and both were dropped.

Michael Vick seemed to have more of a handle on the offense and with his quick release was able to avoid being sacked on multiple occasions.

Vick finished the evening 7-for-13 for 47 yards, but also added two scrambles for a total of 35 yards.

On one play, if the scrimmage was a game, Vick would have gotten crushed by Rontez Miles who came on a backside safety blitz and reached the quarterback before he hit the third step in his three step drop.

For those who want a winner declared between the quarterbacks after each practice, Vick was clearly the better signal caller on Saturday night.

It wasn’t all bad for the offense, new addition Chris Johnson looked quick hitting the holes on the few plays that he was in the game. Escaping the scrimmage without any damage to his surgically repaired knee is a very positive step in the right direction.

Eric Decker, who may have gotten the biggest cheer from the crowd when introduced, finished with one catch for seven yards.

The biggest standout of the night was Greg Salas, outside of a pair of bad drops towards the end of the scrimmage, Salas showed that he could get himself open and make catches when targeted. He finished the night with five catches for 54 yards.

Outside of a fourth down catch by veteran Jeff Cumberland, the tight ends, including rookie Jace Amaro were invisible.

Like most Sundays, the defense was the best part of the Jets. The team only allowed three field goals to an offense that is expected to be much improved over last year.

Standouts on Saturday included Kendrick Ellis, the fourth-year nose tackle, shot a gap and completely obliterated a running back (I believe it was Alex Green) for a tackle for a loss.

Rontez Miles played quite well with a sack, another quarterback pressure and a pass defense.

Jason Babin, the recently added linebacker had his name called several times on Saturday, including a pair of sacks.

An Alex Green fumble led to a scoop and almost score for T.J. Barnes, who ran about 15 yards before being dragged down by a host of players.

A slimmed down Quinton Coples seemed quick on Saturday night and had several opportunities to blow up runs plays at the line of scrimmage, but pulled up due to it being a scrimmage.

Outside of an interception by Jeremy Reeves and the sack by Miles, the secondary left much to be desired. Cornerback Darrin Walls dropped a sure pick six, which cannot happen if the Jets want to win games. As Head Coach Rex Ryan has already stressed creating turnovers during training camp; the team cannot afford to give away sure fire ones.

Dimitri Patterson was burned badly by Hill on his 41-yard reception. Patterson did not impress much during his first green and white scrimmage.

The team announced last week they would have a “Launch Crew” throwing t-shirts into crowds during games this season. Fans got their first taste of this on Saturday night and in my opinion, it was a disaster. Though shirts were only launched into the stands during breaks in the action, plays were missed as people continued to stand up screaming for more shirts to be thrown. Most people lost interest in the scrimmage quickly and just started searching for the perfect spot to hunker down to try and catch a shirt. One gentleman in front of me almost fell down the steps of the bleachers in an effort to claim a shirt. With no alcohol being served on Saturday, I can only imagine what it will be like when there is.

The team also debuted a new entrance tunnel on Saturday. While nice, the large inflatable tunnel with a jet on top did not excite me as much as the flames shooting from the towers as the players ran out.

As all the players were announced by name, new additions Eric Decker and Michael Vick received the biggest cheers.

The announced attendance for the scrimmage was 7,125 people.

This Article Was Written By Joe Carlson