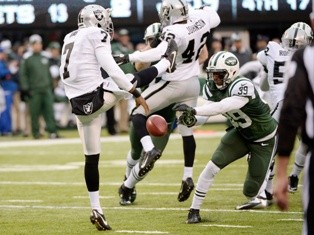 Antonio Allen has entered the NFL concussion protocol according to New York Post beat writer Brian Costello.  This is bad news for the Jets as Allen was being tried out at the CB position due to a banged up secondary.  The Jets’ top three corners (Dee Milliner, Dmitri Patterson, and Dexter McDougle) are all out with various injuries. Desperate for depth at the position, the Jets had been auditioning Allen in each of the last two pre-season games.  This creates yet another hole in an already thin secondary.

Rex says Antonio Allen is in the concussion protocol #nyj

Rex Ryan was pleased with Allen’s performance against the Giants.

I was happy with Antonio Allen until he (was injured). He’s in the concussion protocol right now. I thought he was playing well until friendly fire got him. I told him that he was going to get some opportunities to make some plays when they throw the ball down the field on us.