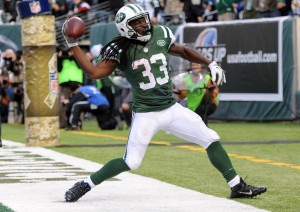 There was a lot to like about Geno Smith’s day. He showed off his speed on multiple occassions and was mostly accurate on the day, leading the team effortlessly between the 20’s. His few mistakes were big mistakes, though, as he threw an interception, lost a fumble and took too many sacks when he should have thrown the ball away. One sack in particular cost the Jets 3 points, as it knocked them out of field goal range. Still, by and large, this was a step forward for the sophomore QB.

Johnson, Ivory and Powell are the perfect combination for the Jets and they showed that in a big way against the Raiders. Johnson was a threat both on the ground and in the air, and Ivory looked an awful lot like Johnson on a huge touchdown scamper that all but sealed the game for the Jets.

This group caught almost everything that was thrown in their vicinity, and boy isn’t it nice to have a young and talented receiver like Decker join the corps. Despite their success on the day, the team struggled to score in the red zone—something that newcomers like Decker and Amaro should be able to help out on in the future.

This offensive line has a nasty streak, and they rode that to over 200 yards rushing. But that nasty streak also presents dangers, as the group was flagged for penalty after penalty… from holding to false starts to personal fouls.

The defensive line didn’t record a sack, but they sure disrupted the Raiders offense. Don’t let a clean, efficient looking stat line like Carr’s (20/32, 2 TD, 0 INT) mislead you, this unit was up in his face all day long.

It was an outstanding game for the backers, as they limited the talented running back duo of Jones-Drew and McFadden to a combined 26 yards on 13 carries today. Coples forced a fumble and Babin recorded a sack.

The much talked about Jets secondary held up just fine against the Raiders rookie QB. Can it hold its own against teams like Green Bay and Chicago, though? I doubt it. Still, credit where credit is due: there were few major gaffes on the day, and quite a bit to like.

Nick Folk picked up right where he left off last season, nailing 2 field goals, one of which was from 45 yards out. Rookie punt return man Saunders showed a bit of explosion and more importantly, held on to the ball. The punting game could still use some work, but Quigley did drop 2 of his 5 punts within the 20 yard line with a long of 56 on the day. Hakim looked like a true playmaker, at least as a kickreturner—averaging 32 yards on the 2 kicks that he chose to return.

The Jets lost the turnover battle yet again, and committed nearly 3 times as many penalties as the Raiders (11:4). Those are the kind of mistakes that better teams will make you pay for.