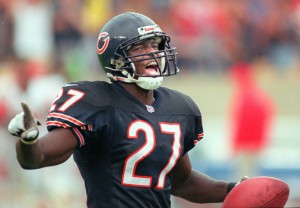 Geno looked amazing at all of the small things, moving the ball effortlessly between the 20’s. The only problem is that he’s been terrible when it really counts. The list of mistakes tonight is lengthy: an interception in the end zone, a pick 6, yet another sack that caused a massive loss when he should have tossed the ball away and a number of additional throws that could have been picked. He’s starting to remind me of Tony Romo. The completion % and yardage are there, but there are far too many mistakes. A slight nod in favor of Geno, though: Romo has historically had much more talent around him.

Chris Ivory was an absolute monster on the night, and contributed heavily in the passing game.

Salas and Kerley both made plays, but David Nelson nearly turned the ball over on two separate occasions and while Jace Amaro did contribute late in the game, he also dropped an easy 3rd down pass that would have been a nice gainer for a 1st down.

With Decker leaving the game, the Bears defense was able to get after Geno Smith with a little more success. The Jets never had much of a chance to commit to the run but when they did, they looked effective. Willie Colon committed another penalty. Not that it should surprise you.

The Jets defensive line lived up to its billing, disrupting both the running game and the passing game. Richardson had a sack and
Wilkerson had 1.5 sacks. Take away the 7 points on Geno Smith’s pick 6 and this defense held the Bears to just 20 points and that’s respectable.

Bears RB Matt Forte rushes for just 33 yards on 13 attempts. DeMario Davis recoevered a fumble that probably should have been a
Jets touchdown if the refs managed to hold their whistle for another second.

The secondary actually held up pretty well. Granted, Jeffery did go for 105 yards on the day, but a wounded Marshall was held
to just 6 yards on 1 reception.

It’s clear this team never quits, and credit that to the coaching staff. But the same problems that existed last year have carried over into this season. There
are far, far too many mistakes. Mistakes by nearly every level of the defense and offense. It’s true week in and week out. It’s gone on way too long and Jets fans don’t want promises, they want answers.