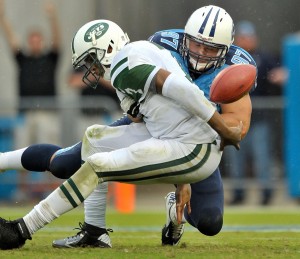 There’s an old adage: you know a longsnapper is doing his job when you don’t see him. Perhaps the opposite could be said of a quarterback: Geno Smith was invisible today and Michael Vick was no better. Spark? Don’t make me laugh.

The Jets were down just 1 score when Phillip Adams picked off Rivers in the endzone, robbing San Diego of 3-7 points. It was the Jets first interception of the season… in game 5. Chris Johnson then promptly fumbled the ball back to the Chargers on the very next play. You’ve. Got. To. Be. Kidding. Me.

With Decker out, the Jets have no answers. That much is clear. Greg Salas was probably the Jets most dangerous weapon on the field, and there’s many rosters that he couldn’t even crack. This lack of depth is on general manager John Idzik’s failures in the draft and stinginess in free agency.

It was their worst game of the year, as they not only continued the trend of committing far too many penalties, but also cleared the way for the Chargers to swarm Geno Smith and Michael Vick at every opportunity.

It’s hard to knock this group too much, as they clearly get after it, even in 110 degree weather. But there’s no denying the success Rivers and the Chargers had both in the passing and the rushing game, and some of that has to come back to the Jets much vaunted defensive line.

The Chargers were one of the worst rushing teams in the league coming into week 5. That didn’t stop them from running all over the Jets, as they amassed more yards on the ground in the 1st half than the average amount of rushing yards the Jets have surrendered in a full game.

Phillip Adams had an interception. Rivers completed a couple of passes despite solid coverage. Thus ends the highlights for the secondary, who is still busy surrendering 3rd downs.

Hey, we’ve got a punter. Don’t look now, but Quigley is actually pretty good, for the most part. Nick Folk didn’t even get a shot to kick a field goal today.

What coaching? The discipline and penalty problems continue, Marty had no offensive gameplan and the Jets were unable to adjust on offense as well as defense.