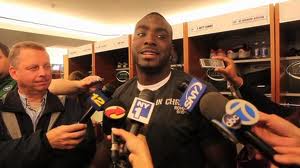 In the wake of an embarrassing 31-0 defeat at the hands of the San Diego Chargers, third year linebacker and defensive leader Demario Davis had some harsh words for some of  his teammates.  According to Rich Cimini of ESPN.com, Davis was quoted after the game as saying “Right now, we’re not practicing like a championship football team.” and continued “I don’t see a lot of guys putting a lot of effort into film study.”  There isn’t a more damning statement in professional sports than to have a player accuse teammates of not putting in the necessary work.  Davis was drafted to be a leader on the field and in the locker room and that’s exactly what he’s doing.  Clearly Davis wants to see a greater level of commitment from his teammates moving forward, and sadly this isn’t the first time  he’s had to speak up on the issue.  During training camp, Davis talked about some players on the roster only doing what was mandatory, and not willing to put in any extra work before or after practice to get better.  Rex Ryan has gone on record saying that Davis is a passionate and vocal leader, but this time  his words could come back to haunt the head coach, as ownership and fans will speculate as to why Ryan isn’t demanding more out of his players.

Demario Davis: 'We're not practicing like a championship team': SAN DIEGO — After the New York Jets got truck… http://t.co/HeSQz949Uc