Idzik Pulls Off Blockbuster Deal For Harvin, What Does It Mean? 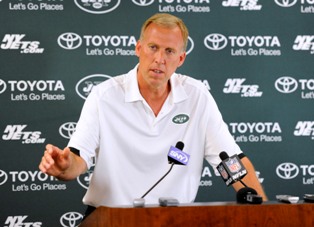 John Idzik and the New York Jets shocked the football world today when they made a trade to acquire veteran wide receiver Percy Harvin from the world champion Seattle Seahawks.  The Jets sent a conditional mid-round pick to Seattle in exchange for their disgruntled superstar.

Upon learning of the trade on my drive home from the airport, I heard several fans calling in to sports radio shows to talk about the move being one of pure desperation.  General Manger John Idzik was being torn apart by those who said the move should have been made sooner.  The calls were coming in one after the other, many fans criticizing the trade for a multitude of reasons.  So let me say this…step back, and take a deep breath.

Please stop the yelling, screaming, criticizing, arguing, blaming, and complaining.  John Idzik could have acquired Harvin for many different reasons.  It may have been one of desperation.  It may have been an attempt to calm the masses who are calling for his head.  Some have speculated that owner Woody Johnson may have demanded Idzik make a move to improve the roster and appease the season ticket holders. The important thing to remember however, is  that none of that matters.  The only thing that does matter is that for the first time in years, the Jets have a player on offense who opposing defenses must account for.  Harvin is a player who can line up anywhere, and is a threat to score from all over the field as both a receiver and a runner.  This, my fellow Jets fans, is a good day for the this franchise.  Here’s a breakdown of what this deal means for the Jets moving forward.

No more excuses.  There has been plenty of talk this season about how Geno Smith’s production is lacking as a result of legitimate targets to throw to.  Even before this trade, expectations for Geno should have been elevated as Eric Decker’s hamstring improved and Jace Amaro began to emerge as a viable option.  Decker, Amaro, and slot receiver Jeremy Kerley are a decent group, and should therefore yield decent results.  Harvin’s addition however, is a significant upgrade and all of the other Jets receivers should benefit.  Decker will see fewer double teams, which would lead one to believe an increase in production is right around the corner.  As it stands, Geno Smith now has four legitimate targets to choose from, and a running game that should be good enough to keep defenses honest.  If we don’t see a vastly improved Geno over the second half of the season, it should be time for Idzik to acknowledge that Smith is not the answer at quarterback.

As mentioned above, the Jets have a legitimate game breaker that they have lacked for years.  The last time the Jets had a player with this type of ability was Santana Moss from 2001 to 2004.  The difference between Moss and Harvin is that this time around the Jets have an offensive coordinator who will utilize his skill set.  Moss was largely ineffective for the Jets during his tenure as offensive coordinator Paul Hackett preferred a dink and dunk offense, and didn’t make nearly enough effort to get the ball to Moss in the open field. Current coordinator Marty Mornhinweg will not have that issue.  While in Philadelphia, Mornhinweg had a player who was very similar to Harvin in Desean Jackson.  Mornhinweg found ways to get the ball in to Jackson’s hands to make plays, and while Jackson is probably the more talented of the two, their size/speed/skills are very similar, and that should be encouraging for Jets fan.  In addition, Harvin gives the Jets an immediate upgrade to their special teams if they choose to use him in such a capacity as has five career kick returns for touchdowns.   Harvin has also already been paid a huge portion of his guaranteed money from the six-year contract he signed with the Seahawks when they acquired him from the Minnesota Vikings.  If Harvin doesn’t pan out, cutting him won’t be a crippling move.  If he does, the Jets have an explosive player in his prime under contract for the next five seasons to work with Eric Decker who is in year one of his four-year deal.  Not a bad set of receivers.

Harvin has had durability issues that have caused him to miss 23 games in the past two seasons.  Injuries and migraines have plagued Harvin for years, but when he’s on the field,  he has proven himself to be a game changing asset.

This deal is too good to be true, and that’s often a bad thing.  Despite having given up three draft picks and signing him to a six year, $67 million contract, with $25.5 in guarantees, the Seahawks traded him away for pennies on the dollar.  For a team to willingly part with a player despite having given up that much for him just twenty months ago has to raise some flags for even the most optimistic fan.  Players with Harvin’s talent don’t generally get traded twice in 20 months unless there are some underlying issues. Having just rid themselves of Santonio Holmes, it would be a  huge mistake to bring in a player who may possess Holmes like qualities.

Having just played on a Thursday night, the Jets will have a few extra days to work with Harvin and get him incorporated in the offense to build a little chemistry with Geno.  So, as we sit and discuss/debate/argue this trade, it’s important to remember that right now, the Jets are a vastly better team than the were just a few hours ago.  Enjoy it while you can, I know I will.