Bilal Powell Out With Illness and Other Inactives 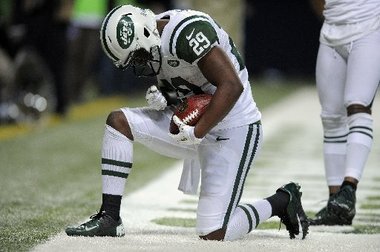 Bilal Powell will not be suiting up for today’s game against the Bills. Powell is apparently dealing with an illness that will render him unfit to play.

Dakota Dozier and Wesley Johnson most likely won’t be active for the rest of the season, unless the Jets suffer another injury on the offensive line. Dozier could have a chance in camp next year to assume a starting position on the line next year unless Aboushi plays very well for the remainder of the season.

Walt Powell will be inactive again today, and it seems he has very little value to the Jets now after acquiring Percy Harvin. Powell was given the nod for kick return duty for a short time, but there’s no point in using him now with Harvin in the fold.

It’s likely that Simms will be inactive for the rest of the year as well, he was only recently promoted from the practice squad. With Geno on the bench, he’s the third man down the totem pole.

IK Enemkpali is inactive again this week, and likely won’t see any more playing time this season either. With the Jets loaded at the outside linebacker position there’s very few snaps to go around as it is.

Josh Thomas will also be inactive meaning the Jets’ starting corners will likely be Darrin Walls and Phillip Adams.

At 2-8, and with a competitive race for the 2 wildcard spots, the Jets are virtually out of playoff contention. A large number of changes are likely in store for the management, coaches, and the players. One of the most intriguing dilemmas of the Jets offseason will be what to do with Geno Smith. Smith likely threw away his chances as the starter for the Jets when the Jets last played Buffalo. As well as throwing three interceptions… in 10 minuets. If the Jets can finish strong it could give Rex&Co. some breathing room to retain their jobs, but would it be the right thing for the franchise?