Is The Current Jets Season Making You Go On Tilt?

When ESPN posts a Draft Watch on their blog so fans have something to get excited about, you know it’s a difficult season. An eight-game losing streak book-ended by only two wins is bound to make true Jets fans start pulling out their hair.

In times like this, we can look for some advice from professional poker players who can truly understand the mental strain of a losing streak, but who know that going on tilt can lead to even worse results. Poker and football share more similarities than you might think, as the mental game in both sports can often be just as important as the other aspects. 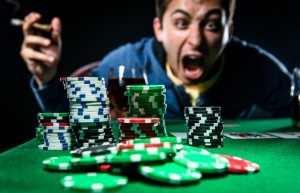 Have you ever noticed that Eli could throw up the sideline and on every play there could be a different result? Well duh! Of course you say there’s a different result; it’s a different play. The problem with this thinking is that it is not strategic or tactical enough to ensure the right plays are called.

Professional poker players are able to manage players at a table, always remembering what hands were dealt, how the betting happened and which players at the table are playing tight, loose or even aggressive. This is what truly separates the best in every sport; choosing the right strategy at the right time.

When the team is losing eight straight games, there is something wrong with the team’s play calling ability. Over time, it should get better, no matter the circumstances. If the playmaker, Eli, is on his game, then he will be able to notice on every play if he is focusing on his task and is on his game, and what will net the best possible result. Even if he has to call an audible or change it in the midst of the play, it is this strategy that wins football games – and incidentally, poker tournaments.

Businesses call it “change management,” poker pros call it “changing gears” and in professional football it’s making the right play calls. It is simply: changing your play style or play calling to affect a better result against your specific opponents. If Eli makes a three time pass to Harvin against the same defensive structure without changing it up, what would happen? Probably the opponents would make a read on the play and intercept the ball.

In poker, of course the best pros would also recognize the same play by an opponent and either be able to bluff or call them down for a big win. In either scenario it’s the skill of reading your opponents that sets up the win. This also helps in making the right decisions about your play. When playing online poker, it’s more about the technical game: reading the information given to you, such as bet sizing, and learning an opponent’s playing style, as well as understanding how to value hands against your opponent’s range. This is all applicable on the football field as well.

If you pay enough attention to how the Jets are playing, you will see that the attitude of the top players makes a big difference on the rest of the squad. Same hold true for the NY Giants, if Eli is having an “off-day” and shows his frustration, such as the “worst game of his life” against the 49ers with 5 interceptions, it creates a trickledown effect. Manning was not the only player to let the team down that day. Part of his failure can be laid at the defensive line for allowing such free reign of the 49ers’ defensive line to reach Eli so many times. Even though the Giants’ defense helped keep them in the game, Eli simply could not put together a comeback drive.

Poker players often deal with similar situations where they make a poor decision because of a lack of focus, get their cards in badly and are dominated by their opponent and lose a big pot. Being a professional is about learning to get some mental toughness to shrug off either a tough loss, bad beat or a wrong decision, and focus only on the next play. It’s during these times that true fans who keep cheering can sometimes make a difference by boosting your own team.