Jets’ Coples Should be in a Hurry to Make More Plays 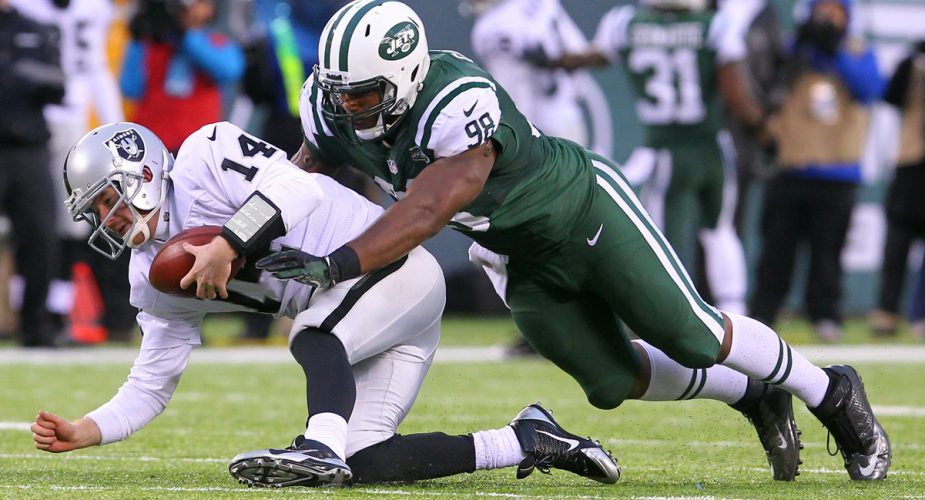 With just over half of his third NFL season in the books, New York Jets outside linebacker Quinton Coples continues to baffle Jets coaches and their fans. He continues to come up short of fulfilling the expectations that were heaped upon him when he was taken with the sixteenth pick of the 2011 NFL draft out of the University of North Carolina. Given the amount of raw talent Coples possessed coming out of college, some questioned his work ethic, but others chose to ignore it due to his undeniable physical ability.  Despite some experts accusing Coples of a lack of desire, plenty of analysts were sold.  Here’s what NFL.com had to say about Coples in their scouting report leading up to the draft in which they gave him an overall prospect score of 92 out of a possible 100.

He has, at times, looked to play on cruise control, but it will be tough for many NFL front offices to ignore the natural ability that Coples possesses and the physical presence he brings to any defense. He can play defensive end in both 4-3 and 3-4 schemes, and should be selected in the early part of the first round.

NFL.com was correct in their assessment of Coples in saying that he would go in the first round, and during his rookie campaign it looked a decision that was going to pay dividends.  Despite the fact that he was only a part-time player, the organization saw progress from the lineman as he amassed 5.5 sacks, four of which came over the last three games of the season.  According to PFF.com, Coples produced five games in which he earned an above average grade as a pass-rusher, with three of those five coming in the final four games.  Jets fans hoped that Coples had turned the corner and would be ready to become an impact player in year two, but that wouldn’t be the case.

During that off-season, Coples learned that he would be making the switch from the defensive line to outside linebacker as the team lacked a true threat coming off the edge.  This would, in some ways mean another rookie season for Coples as he would be learning a new position instead of fine-tuning what he had learned the previous season.  Further complicating things for Coples was a significant ankle injury during the pre-season that caused him to miss the first two weeks of the year, and hampering his mobility from that point on.  If and when Coples failed to make a  play or was out of position, we were left wondering if it was the inexperience at linebacker or the lingering ankle injury.  Either way, Coples’ second season could only be classified as a disappointment after showing so much promise during the latter part of his rookie campaign.

With a year of learning under his belt, at the start of this season Coples announced that he had worked to drop fifteen pounds in an effort to make himself a more effective pass-rusher, which was of course, the reason behind his move in the first place.  Despite a low sack total during the previous season, Coples was credited with 23 quarterback hurries in just fourteen games.  Surely the fifteen pounds would give him the extra step he would need if he was going to turn some of those hurries in to sacks, but that has simply not been the case.

Through ten games this season, Coples has managed to register just 2.5 sacks despite once again, applying a fair bit of pressure on the quarterback.  Following his 23 hurries last season, Coples is 20th in the NFL among OLBers with sixteen to his credit this year.  While hurries can contribute to the success of a defense, the Jets didn’t draft Coples to be among the league leaders in pressures or hurries, but in sacks.  Since that rookie season in which Coples showed so much promise as a pass-rusher, he has managed just one positive PFF rating as a pass-rusher in his last twenty-four games.

While Coples’ critics seem to be on the rise, there appear to be three different theories as to why he has struggled with consistency over the past few seasons.  Some question his ability, some question his effort, and other blame the Jets coaching staff for playing the former defensive lineman out of position.  Whatever the reason may be, if Coples wants to put himself in position for a big payday when he enters the final year of his contract next season, now would be a good time for him to turn some of that raw ability into on-field results.