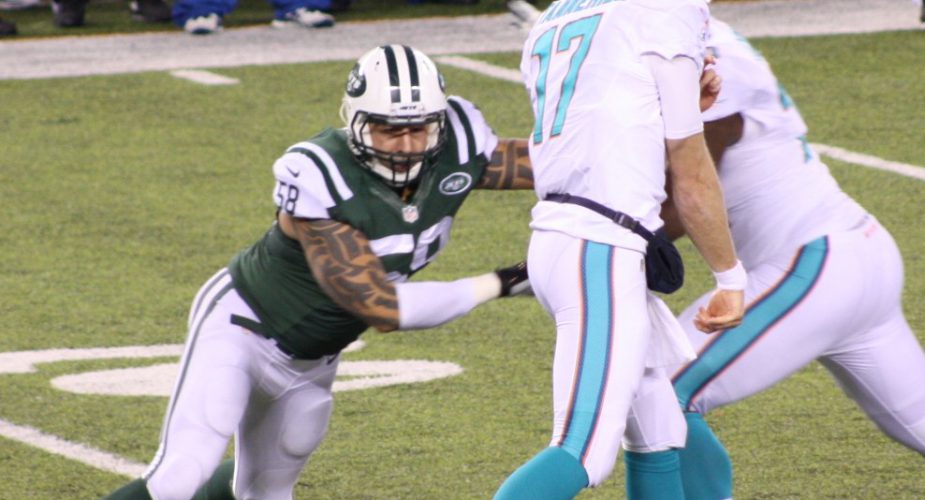 To say not much has gone right for the Jets this season and that many players have failed to live up to expectations would be an understatement.  Quarterback Geno Smith didn’t make the progress many had hoped for after showing improvement late last season and following it up with a solid pre-season this year.  Fellow second-year man, cornerback Dee Milliner wasn’t able to capitalize on last year’s strong finish either as he’s been out for all but two games with multiple injuries, and third round draft selection Dexter McDougle couldn’t stay healthy enough to claim a starting spot that he appeared ready to seize in training camp.

One player who has quietly performed better than most anticipated, though not in the manner expected, is veteran OLB Jason Babin.  Babin was brought in by the Jets who were in need of an edge rusher when it became apparent that OLB Antwan Barnes wasn’t going to be able to fill that role as training camp got under way.  Babin became available under a bizarre set of circumstances when the Jacksonville Jaguars cut him loose just a few months after signing him to a contract extension.  There were some red flags when Babin arrived with the chief concerns among Jets fans being Babin’s reputation as both a poor teammate, and a poor run defender.

The poor teammate speculation was largely based on Babin’s history of bouncing from team to team.  In the NFL, pass-rushers are a premium asset, and despite showing the ability to get to the quarterback throughout his career, Babin has managed to move from one team to another ten different times.  That alone would make anyone wonder about his character.  The curious part however, is the fact that despite those ten team changes, three teams made moves to re-acquire Babin after letting him go once before.  Both the Seattle Seahawks and Jacksonville Jaguars have acquired Babin twice, and the Philadelphia Eagles have employed him three times.  Curious decisions to see multiple organizations make for a player rumored to be a disturbance in the locker room.

As far as his on-field play, there has been little reason to question his ability to get after the quarterback.  Babin registered forty sacks over parts of the last six years having missed several games due to injuries, but he was also said to be a player who came off the edge with reckless abandon and therefore, often weak in run support.  He was considered by some to be a “one trick pony” who was only interested in getting to the quarterback.  Oddly enough, in his first season with the Jets, Babin’s sack totals are down (3), but his play against the run has been far better than advertised.

Not only  has Babin not been poor against the run, but he’s turned out to be one of the better performers on arguably the best run defense in the NFL.  While it’s worth noting that Babin has not been an every down player, he has still managed to earn a higher grade from PFF.com in his play against the run (5.3) than he has as a pass-rusher (4.2).  Despite his low sack total Babin has still been putting consistent pressure on the quarterback.  To date, he has 6 quarterback hits and 15 hurries to go along with his three sacks as a part-time player.  At one point this season, Babin had supplanted first round pick Quinton Coples but has since gone back to being a rotational player.

Originally signed to a two-year deal by John Idzik,  if Babin continues to perform like a player who can be trusted on every down, the Jets may wind up being the first team to employ him for consecutive seasons since he spent the first three years of his career (2003-2006) with the Houston Texans.  More importantly, the Jets may have done what has felt like the impossible as of late, and acquired a player who not only lived up to, but exceeded expectations.

By Glenn Naughton
Posted on December 5, 2014