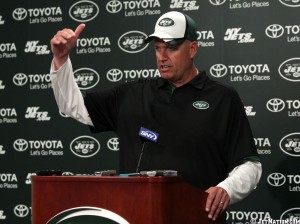 Apart from a fumble, it was a nearly perfect day for Geno Smith. Yes, you read that correctly. In what might be his final start as a Jet, Geno finally put it all together.

Miami’s run defense held the Jets down all day. It was one of the poorer performances for this group this season, especially when you consider the way they stepped it up the last time they faced Miami.

Eric Decker had a monster game, grabbing 10 catches for 221 yards and a TD. It was the first time all year that Geno and Decker looks completely in sync. Chris Owusu almost single-handedly engineered a touchdown drive. But other than that, there wasn’t much to see here.

The offensive line held up just fine in the absence of pro bowl center Nick Mangold, much to everyone’s surprise.

Richardson and Wilkerson are absolute beasts. The Jets tallied 7 sacks on the day, the most they’ve ever gotten against Miami in a single game.

In what could be his last game as a Jet, middle linebacker David Harris gave his all.

This is a true cast of nobodies, but they held their own against a high powered Miami passing game.

Nick Folk is still injured, and you can tell. TJ Graham held his own on kickoff returns with Percy Harvin sitting for the day.

Rex Ryan drew up one of his best gameplans of the season in what could be his final appearance as Jets head coach.