Is Marrone the Man to Dethrone Pats? 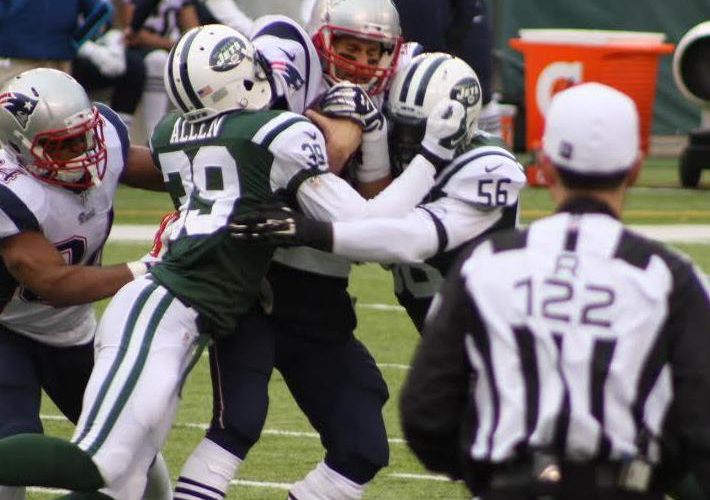 With each passing day of the New York Jets’ search for a new Head Coach, reports continue to surface with the implication that Doug Marrone, formerly the Head Coach of the Buffalo Bills, is the man at the top of the Jets’ wish-list to replace the departed Rex Ryan.  If this is in fact the case, and the Jets choose Marrone to right their ship, they must be of the belief that he has what it takes to dethrone the rival New England Patriots.

After all,  the division has been ruled by Bill Belichick and Tom Brady for over a decade as the pair has managed to top the AFC East twelve of the last fourteen years, including a current streak of six in a row. Rex Ryan was at the helm for the Jets in each of those six years, and Marrone in Buffalo for the last two.  It will be up to the Jets next Head Coach, whoever that may be, to find a way to unseat the perennial division winners. With Marrone appearing to be the favorite, JetNation.com decided to take a look at how he fared against the Patriots in his short-lived stint with the Bills, compared to the Jets’ match-ups during that same time frame against the two future Hall of Famers.

Having lasted only two seasons in Buffalo, Marrone’s track record against the Patriots is extremely limited as he faced New England just four times.  Further dwindling that number is the fact that two of those games were Week 17 clashes in each of the past two seasons. When those games were played the Patriots were sitting on twelve victories and a playoff berth securely in hand, while the Bills had already been eliminated from post-season play.

Entering their 2014 season finale against the Patriots, a degree of uncertainty surrounded the Bills.  Marrone had an opt-out clause in his contract that was triggered by the sale of the Bills earlier in the season, and his future was up in the air.  In addition to that, Buffalo was eliminated from playoff contention the previous week when Tony Sporano and the Oakland Raiders handed Buffalo what was essentially a season-ending defeat.  Following that 26-24 loss to the 3-13 Raiders, Marrone’s Bills managed their lone victory against the Patriots in his two seasons as Tom Brady and Jimmy Garoppolo were held to just three FG’s in Buffalo’s 17-9 victory.

Marrone, however, didn’t fare quite as well in his other three match-ups against Brady and company.  In his first game at the helm for Buffalo, a 23-21 loss, the Patriots racked up 431 total yards as Tom Brady tossed two touchdowns and one interception going 29-52 for 288 yards.

The following week, the Patriots would take on the Jets in Foxboro and come away with another close victory, this time a 13-10 tally as Brady was less effective.  Against the Jets, Brady completed fewer than 50% of his passes in going 19-39 (49%) with one touchdown and no interceptions.  In total, the Pats logged 232 yards, 200 fewer than the Bills and former Ryan protege Mike Pettine were able to limit them to in their season opener one week earlier.

Marrone and the Bills wouldn’t see Brady and Belichick again until the aforementioned Week 17` tilt that pitted the playoff-bound Pats against the 6-9 Bills.  Wanting to keep Brady fresh for the playoffs, but out of harm’s way, the Patriots game plan was clear from the outset. Run, run, and run some more.  In what turned out to be a 34-20 Patriot victory, Brady threw just 22 passes, compared to 43 run plays. The run-heavy game plan resulted in 267 yards on the ground, roughly 100 more than the Bills had given up to any other team that season. In losing both games to the Patriots in his first season as a head coach, Marrone’s defense surrendered a total of 57 points on 813 yards. With Pettine calling the shots on defense, Marrone’s Bills struggled in slowing down the Patriots’ offensive machine.

Ryan’s Jets saw their second match-up against the Patriots in Week 7 of that season in a memorable 30-27 overtime Jets victory. The Jets caught a break in this one as a rarely called penalty against the Patriots gave them a second chance at a game-winning FG, one that PK Nick Folk would hit from 42 yards.  Despite the Patriots impressive point total, the Jets handled Brady fairly well.  For the second time that season, the Jets held the signal caller below 50% completion percentage as he went 22-46 without a touchdown pass and threw one interception. This time around was more impressive than the first as it marked the return of TE Rob Gronkowski who had a big day, but not big enough to get the Pats a win on the road.  The final tally for the Patriots offense in their 2013 head-to-head match-ups with the Jets resulted in 33 points on 527 total yards, roughly 300 yards and 20 points less than what they produced against Doug Marrone and the Bills.

Unlike his first season with the Bills in which Marrone opened up against New England, season two would have the two teams scheduled to meet closer to the mid-way point in Week 6.  Like the first two match-ups, this would be a New England victory, and similar to their previous meeting, somewhat of a blowout.

A 37-22 Patriot win in which New England chose to all but ignore their own ground attack.  After racking up close to 300 yards on the ground in their previous meeting, the Patriots chose to put on an air show, and Tom Brady had a very Tom Brady-like day.  A final stat line that saw Brady go 27-37 (74%) while amassing  361 yards and 4 touchdowns without an interception doomed the Bills.  The Patriots light rushing attack saw the Patriots combine for 396 yards of offense in Orchard Park.

In 2014, the Jets were unable to come up with a game plan to beat the Patriots as the Jets finished 4-12.  Two head-to-head meetings resulted in losses by 2 and 1 points respectively.  In  their first meeting in Foxboro, the Jets rushed the ball early and often to keep the Patriot’s offense off the field but it wasn’t enough.  The Jets stayed within a score, but ultimately came up short as the Patriots combined for 323 yards of offense.  A late game winning FG attempt by Nick Folk was blocked by the Patriots, and the ball fell harmlessly to the turf with the game coming so close, the Jets falling short once again.  Ryan’s final loss to the Pats would mean a 4-9 record against the division rivals, a winning percentage of just 31%.

Their 2014 week sixteen match-up, a game with some meaning to New England as a loss could have meant traveling to Denver for their first playoff game, also had some meaning for the Jets.  There were no post-season ramifications for the 3-11 team, but it would be Rex Ryan’s last shot at Brady and Belichick.  Once again, the Jets defense made life hard on New England and held the Patriots to a season-low 231 yards.  However, once again it was special teams that came up short.  A missed Nick Folk FG attempt wound up being the difference in New England’s 17-16 victory.

Slowing down Tom Brady and the Patriots is no easy chore for any head coach in this league.  However, if the Jets do sign Marrone, fans looking at the results of his first four attempts against the Patriots, may leave some fans wondering who his replacement will be before the ink on his contract is dry.