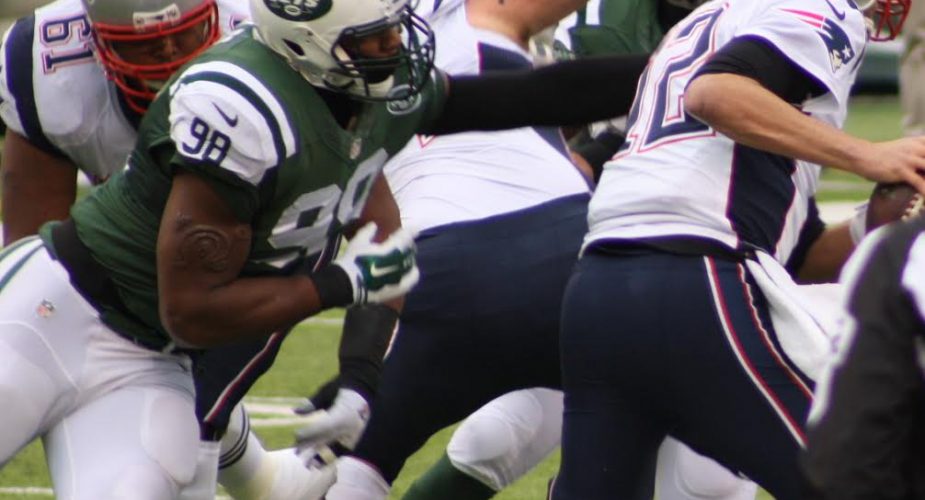 Few players on the current Jets roster should be more tuned in to Woody Johnson, Charley Casserly, Ron Wolf and Neil Glat’s coaching search than outside linebacker/defensive end/defensive tackle Quinton Coples.  The former first round pick out of the University of North Carolina has had a turbulent introduction to life in the NFL for a myriad of reasons and has yet to become the player the Jets hoped he would when they drafted him with the 16th overall selection in the 2012 draft.

As a rookie, Coples’ playing time was limited as he was utilized in multiple positions along the defensive line but started only two games.  His part-time role saw him compile 30 tackles and 5.5 sacks.  Fairly respectable production from a youngster with somewhat limited opportunities.  In season two Coples underwent a transition from the defensive line to outside linebacker.  Add an ankle injury early in training camp to the role change and what you had, was a player trying to learn the nuances of  a new position on the fly while hobbled with an injury for much of the early part of the season.  The result was a pedestrian 38 tackles and just 4.5 sacks, but expectations were raised as Coples managed at least one sack in four of the last five games to close out the season.  The late surge in production left room for optimism heading toward 2014.

Entering the 2014 season, Coples was healthy, at an ideal playing weight, had a year under his belt at OLB, and a full off-season to prepare.  Despite all of that, and his strong finish to 2013, the results weren’t much better than the previous season.  In 2014, he managed just 35 tackles and saw a slight bump in sacks with 6.5, a career best.  While Coples earned high praise coming out of college due to his size at 6′ 6”/280lbs and uncanny versatility, it could be argued that his ability to play multiple positions has stunted  his growth thus far.  At this point, any fans holding out hope for Coples to eventually “break out” won’t have any other way to explain his underwhelming and inconsistent play thus far.

With Seahawks Defensive Coordinator Dan Quinn and Buffalo Bills’ former Head Coach Doug Marrone rumored to be the current front-runners for the Jets’ coaching vacancy, Coples may have reason to be excited.  Both coaches come from teams that employed a 4-3 defense in 2014.  Another candidate, Arizona Defensive Coordinator Todd Bowles used a 3-4 look this past season.  If either Quinn or Marrone get the nod and choose to use a 4-3, Coples may find himself once again playing with his hand in the dirt.  While he has been inconsistent since entering the league three years ago, many feel Coples has done his best work up front as a defensive lineman, and the numbers support that opinion.

For example, while filling in at DE for an injured Muhammad Wilkerson from weeks 13-15 this season, Coples was credited with 6 hits on the quarterback, compared to only five QB hits over the other 13 games in which he played OLB.  Clearly he would have more opportunities to rush the quarterback from the DE position as pass coverage would be a rarity, but not at a ratio that one would expect three games to exceed the results yielded over the remaining 13 contests.

Position changes are nothing new to Coples.  As a defensive lineman in college he was moved back and forth from defensive end to defensive tackle and excelled at both.  Playing DT as a Junior, Coples was All-ACC logging 59 tackles and 10 sacks.  Despite that success, he was moved back to DE for his final season and tallied 55 tackles to go along with 7.5 sacks.  Looking at his production in both college and the NFL, it’s fair to say that if Coples ever does “get it”, the best chance he’ll have is playing for a coach who puts an end to his days as a linebacker, and lets him get after the QB on a more regular basis.  With a 4-3 alignment creating the need for an additional lineman, that may be Coples’ best shot at finally realizing his full potential.