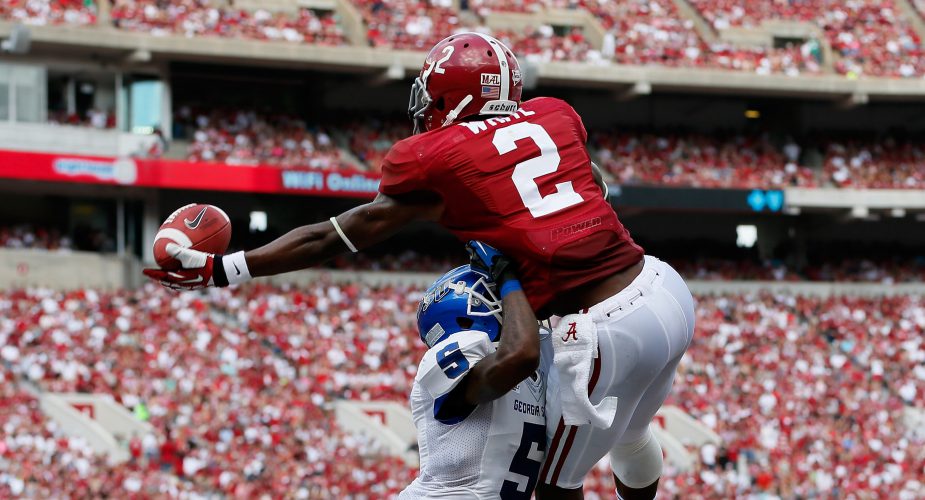 More often than not, attempting to project a team’s draft strategy before the start of free agency is  a fun, yet impossible task.  Clubs with ample cap space and multiple pressing needs are likely to address roster deficiencies during the free agency period as they see fit.  With the New York Jets slated to be in better financial shape than most clubs, many estimates putting them anywhere from $40-$50 million under the cap, the league’s new CBA forces them to spend aggressively which in turn could allow them more flexibility on draft day.

Should the Jets choose to add a wide receiver such as Randall Cobb, Michael Crabtree or Torrey Smith in free agency, the need to draft a one won’t be as glaring as it is now.  However, their lack of depth shouldn’t preclude them from looking for a receiver in the middle or late rounds even with any free agent addition.

Last season, the Pittsburgh Steelers got one of the biggest steals in the draft when they selected Clemson’s Martavis Bryant in the fourth round.  An excellent college receiver who some have speculated was overlooked due to the amount of time defenses spent scheming to stop his teammate Sammy Watkins on the opposite side.

It’s not an uncommon occurrence in the NFL for a receiver to blossom as a pro when given the opportunity after playing second-fiddle to a more highly regarded teammate at the college level.  The Jets once benefited from a similar situation when Laveranues Coles fell to the third round of the 2000 NFL draft and logged a productive ten year career while his college teammate Peter Warrick was the fourth overall selection for the Bengals, yet fizzled out of the league by 2006.

Yesterday I broke down the top two wide receivers Kevin White and Amari Cooper. Should the Jets opt to draft another receiver this season in  hopes of finding another Coles or Bryant, here are three players who may be flying under the radar after spending their college careers in the shadow of their high-profile teammates.

Mario Alford, West Virginia- Alford has spent each of the last two seasons playing alongside top-ten projected wideout Kevin White.  Analysts appear to be going back and forth between White and Alabama WR Amari Cooper for the title of “best receiver” in the draft, but Alford’s production should garner some attention too.  Some teams will undoubtedly be scared off by his size, but the dynamic 5′ 8” WR will likely remind some fans of Tavon Austin who was a first round pick of the St. Louis Rams (8th overall) two seasons ago.  In 22 career games, Alford racked up 1,497 receiving yards on 92 receptions (16.3 avg) and also handled kick return duties.  As a returner at West Virginia he averaged 26.3 yards per attempt to go along with 2 touchdowns.

Against upper-tier competition, while facing no. 4 Oklahoma this past season, Alford hauled in 7 passes for 101 yards, including at 30-yard touchdown grab.  Against Texas A&M in the 2014 liberty bowl the receiver was held to just three catches but made the most of it, averaging an impressive 16.3 YPC, aided by his 49-yard touchdown in the first half.  Despite his speed and production, Alford is viewed as a later round pick if not an UDFA.  Rumored to run the 40 in under 4.4, Alford will get his chance this week to earn some praise of his own as he hopes to move up NFL draft boards. 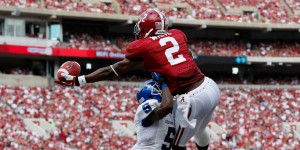 DeAndrew White, Alabama- Anybody sharing the huddle with Amari Cooper this past season was bound to be an afterthought in Alabama’s offense.  Cooper lit up the stat sheet, leading the nation with 124 receptions.  White, a 6′ 182 lb target, did flash some ability when given the opportunity in big spots.   In the SEC championship game against Missouri, White finished with 4 catches for 101 yards which included a 58-yard touchdown grab to give Alabama an early 14-0 lead.

Despite limited opportunities, he’s a player who has stepped up to make big plays on multiple occasions.  Against Oklahoma in the 2013 Sugar Bowl, he torched the No. 11 Sooners’ secondary for 139 yards, 67 of which cam on a long TD strike.  Like Alford, White is projected as a late round pick or to latch on as an UDFA.  Some fans may remember White for this incredible 10-yard touchdown catch that went viral in 2013.

Cam Worthy, East Carolina- While projected third round receiver Justin Hardy out of Eastern Carolina isn’t getting nearly as much attention as the likes of Cooper and White, college football’s all-time leader in receptions with 387 was clearly the focal point of the Pirate’s passing attack.  East Carolina’s number two option however, could be one of the more intriguing prospects in the draft.

At 6′ 2”/200, Cam Worthy possesses good size and hands but was a virtual unknown coming in to this season.  As a JUCO transfer, Worhty played just two games at Eastern Carolina as a Junior, registering 2 catches for 36 yards.  As  senior however, the big man appeared to have come in to his own.  Worthy registered five 100+ yard receiving games and had a career day against No. 17 Virginia Tech.  Against the Hokies,  Worthy posted an eye-popping 224 yards on just six catches, an average of 37.3 yards per catch.  Worthy also put up big numbers in this year’s Birmingham Bowl against the University of Florida, as he finished the day with 8 catches for 130 yards and a touchdown.  A raw prospect with only one full season of playing time in a major conference, Worthy’s big play ability is likely what landed him at this week’s combine as team executives get a closer look.

You can continue the draft conversation about NY Jets wide receivers in our forums.