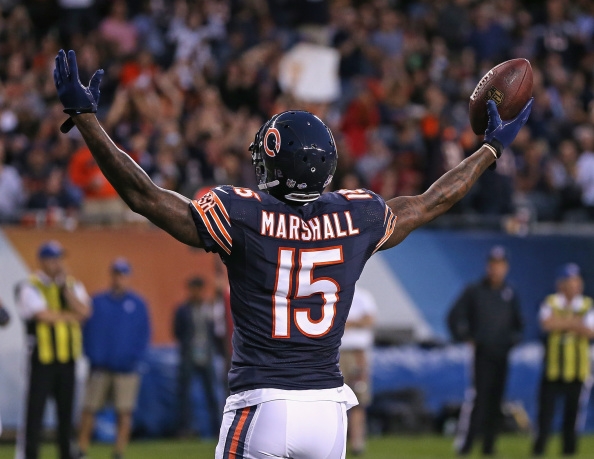 Bringing in the nine year veteran will give the Jets a true number one receiver to play opposite Eric Decker and likely means fellow WR Percy Harvin will be cut loose. Letting Harvin go will allow the Jets to keep their fourth round pick in this year’s draft that would have gone to the Seattle Seahawks following last year’s in-season trade.  If released, the fourth rounder surrendered to Seattle becomes a sixth rounder.

Following a tumultuous season in Chicago in which the Bears offense seemingly fell apart, Marshall’s departure doesn’t come as much of a surprise.  Playing with nagging injuries in 2014, the 6′ 4” Marshall was held to 61 catches for 721 yards and 8 touchdowns.  During the three previous seasons however, he totaled 299 catches for just under 4,000 yards and 29 touchdowns.

New Jets head coach Todd Bowles would have had the opportunity to watch Marshall up close and personal on a regular basis a defensive coach with the Miami Dolphins in 2010 and 2011 when Marshall was with the ‘phins.

You can continue the conversation and let us know what you think about Brandon Marshall to the Jets in our forums.