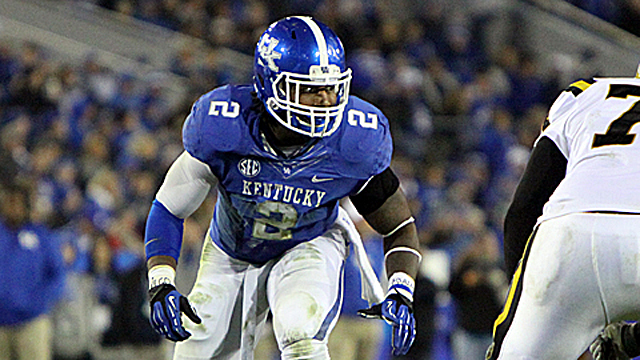 Scott Wright of draftcountdown.com recently joined JetNation Radio to offer his opinion and answer questions from hosts Brandon Dowling and Joe Blewitt regarding his most recent mock draft in which he has the Jets selecting Kentucky outside linebacker Alvin “Bud” Dupree.

After re-building their secondary, re-signing inside linebacker David Harris to play alongside Demario Davis and having their defensive line manned with some of the best in the business in Muhammad Wilkerson, Sheldon Richardson and Damon Harrison, the last glaring need for the Jets to address on defense is a true pass-rushing outside linebacker.

While most experts seem to favor Missouri’s Shane Ray or Dante Fowler out of Florida if he’s not scooped up before the sixth pick, Wright’s projection of Dupree is an interesting one.

At 6′ 4”, 269 lbs, Dupree has the size to hold up against the run better than some of the smaller prospects at the position, but scouting reports suggest he needs to work on honing his pass rush skills.

Projected to go anywhere from 13th to 24th by NFL.com’s panel of experts, Dupree could be considered a reach by some, but given Todd Bowles’ reputation as a creative coach who puts his players in position to succeed, is this the type of player the he and new coordinator Kacy Rodgers can get the most out of?

The analysis provided by NFL.com suggests that the key to Dupree succeeding will rely heavily on what NFL defensive coordinator he’s paired with:

Dupree is an explosive, powerful athlete with a background in basketball. While he’s been productive at Kentucky, his tape doesn’t always do his potential justice. He must continue to improve as a pass rusher, but his traits are undeniable. Difference between being good and great might be his coordinator.

Dupree displayed better speed than some expected in running a 4.56 40 at the NFL scouting combine so his combination of size and speed could give the Jets another versatile player on defense in pass coverage and getting after the quarterback whereas most prospects outside of Fowler are viewed as one-dimensional.

After registering just 2.5 sacks as a freshman at Kentucky, Dupree saw that number climb each season as he collected 6.5, 7, and 7.5 sacks in successive campaigns.  As a player with excellent quickness, Dupree also managed to pile up 37 tackles for loss at Kentucky, 34 of which came after his freshman year.

Given Dupree’s rare combination of physical tools and on-field production, does this mean he’s on the Jets’ radar?  With the draft just two weeks away, we won’t have to wait long to find out.