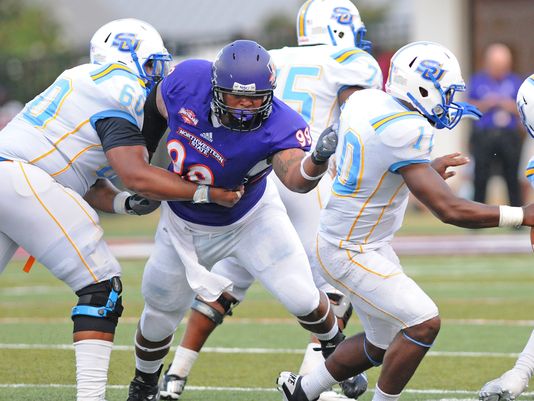 The Jets draft started and ended their draft on the defensive line.  After selecting Leonard Williams with the sixth overall selection, choice number 223 in the 7th round was used on Northwestern St. (La) nose tackle Deon Simon

At 6′ 4”, 321 lbs, Simon played nose tackle in college and earned a reputation as a strong defender against the run.

With such a deep group on the defensive line, the small school product will find it difficult to crack the 53-man roster, but the practice squad may not be out of the question.

Simon’s NFL.com draft profile had the following to say about Simon:

Imposing, wide frame. Displays powerful upper half with ability to manhandle centers or undersized guards. Can eat blocks and command his spot. Uses his hands well down the line of scrimmage against the run and has the tools to become a factor against the run as a pro.

Fails to fire off the ball with quickness or explosion. Plays with straight legs, leading to inconsistency in his forward charge after contact. Motor runs hot and cold depending on game he’s having. Turns into bored pass rusher if initial pass rush is quelled. Still learning to use strength to be more effective bull rusher. Has limited play radius against the run.

Round 7 or priority free agent

Big-bodied defensive tackle who could find a home as a two-gapping nose guard in a 3-4. Simon is 24 years old and is coming off of a knee injury, but he has noticeable power and shows potential to slow the run in the middle of a defense. He needs much better pad level and plenty of coaching for his potential to be unlocked.