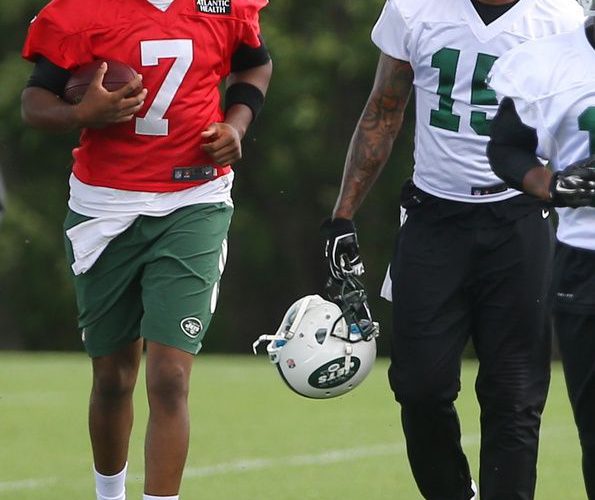 Day two of NY Jets minicamp is in the books and it was a good one for Geno Smith according to Dom Cosentino and Connor Hughes.

Geno Smith bounced back. Smith, the quarterback in the pole position for the starter’s job, had a three-pick day on Tuesday, when he particularly struggled during a red-zone drill. But Smith was sharp in a 7-on-7 on Wednesday, and he didn’t turn the ball over at all. Best advice: Don’t read too much into his performance fluctuations at this time of year. There’s a new offense to learn, and a tremendous defense to face. This was just another day at the office in preparation for what’s to come at training camp.

Ryan Fitzpatrick had a bit of a rough day. Fitzpatrick, who’s battling Smith for the top quarterback spot, made some poor throws and also split some backup reps on the first field with rookie Bryce Petty. But, again, June.

I've never seen Geno this on before. He's red-hot

According to several reports, Geno struggled on day one. Head coach Todd Bowles was asked if he was happy with how Geno responded on day two.

He had a rough day in the red zone yesterday. He did some good things yesterday. It’s practice. There are going to be up and down days. You try not to get too high and too low, you look at the body of work. Yesterday where it wasn’t so rough, today the quarterbacks were decent, so we just have to be consistent.

With the Jets defense looking strong, many have speculated that the Jets could get by with a game manager at QB. Coach Bowles was asked what he thought about the term “game manager”.

Game manager is important, but you’re still going to have to make some throws. You’re not going to win this game just managing football games. The quarterback is going to have to make some throws. That’s part of the requirement of being the quarterback, but you have to be smart. They have to understand when to throw it away, when to take a sack, when to throw it out of the end zone, and when to take a chance. That comes with experience, it comes with just understanding what your offense can do and understanding what the defense gives you. There’s a lot of winning game managers in this league that have won Super Bowls as well that you want to call “game managers” but, at the end of the day, you still have to be able to throw the football.

We will be back with a full recap after day three on Thursday. In the meantime be sure to check out our New York Jets forum for all the latest news.