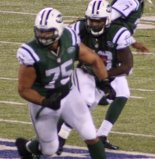 A  native New Yorker, Oday Aboushi was born and raised in Brooklyn before moving on to excel at the University of Virginia at both left and right tackle.

During his time with the Cavaliers, Aboushi would get his first five starts at the RT position before an impressed Virginia coaching staff slid the 310 pounder over the left side for the season’s final seven games where Aboushi would play the remainder of his college career.

Selected with the 141st selection in the 2013 draft as a first-team all ACC lineman despite being a projected top-75 pick by NFL.com, Aboushi found himself moved to the inside to play guard after spending his rookie season on the sidelines.

Following an injury to left guard Brian Winters during the 2014 season, Aboushi got the call to step in and would go on to start the season’s final ten games with mixed results, which one might expect from a young player making the transition not only from college to the pro’s, but from tackle to guard.

Aboushi will once again battle for playing time in what’s sure to be an intense training camp competition at right guard which remains the only unsettled position along the offensive line.