Jets Front Seven Should Have Time on Their Side 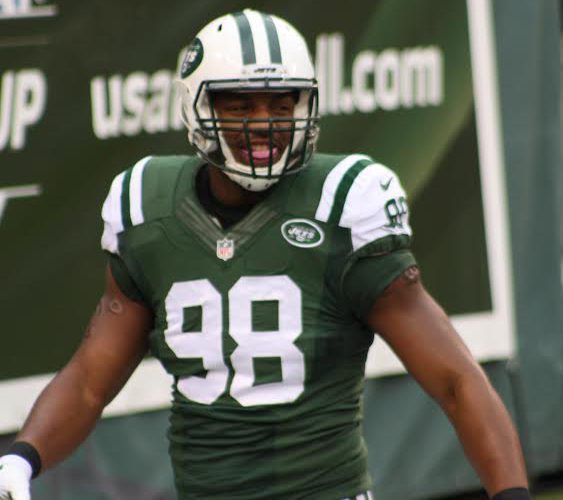 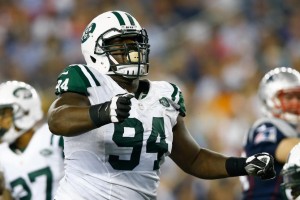 Damon Harrison prepares to enter his third season in green and white.

Even with the recent news of star defensive end Sheldon Richardson’s four-game suspension to start the 2015 season for violating the league’s substance abuse policy, Jets fans are still hoping for big things from a versatile front-seven on defense given the drastic improvements that were made to what was one of the worst secondaries in the NFL last season.

The Jets pass defense ranked sixth in the league, allowing 327 yards per game, but more importantly, they were 24th in the NFL in points allowed with 401 (25.1 ppg).  A defensive backfield that allowed 31 touchdowns through the air will look to clamp down on opposing receivers this season and give the Jets front seven some much needed time if they want to turn their quarterback pressures and hits into sacks.

With Muhammad Wilkerson, and nose tackle Damon Harrison being joined by first-round draft selection Leonard Williams in Richardson’s absence up front, the trio will look to anchor the Jets’ 3-4 scheme.

Head coach Todd Bowles’ penchant for using multiple looks while putting his players in position to succeed could also mean Quinton Coples will be putting his hand in the dirt from time to time.

This Jets defensive line is stout, but there are still questions at the linebacker position as veterans Calvin Pace and Jason Babin could find themselves on the bubble if rookie Lorenzo Mauldin or second-year players like  IK Enemkpali or Trevor Reilly turn heads in training camp. The hope however, is that no matter who gets the call, the Jets will have more time to get to the quarterback. 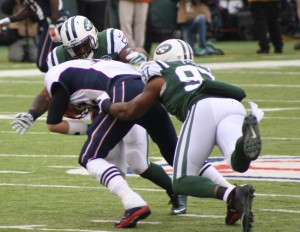 In 2014 the Gang Green managed to tie the Kansas City Chiefs for sixth in the NFL with 45 sacks.  This, despite a grossly undermanned secondary that was led by a pair of previously undrafted free agents in Darrin Walls and Marcus Williams starting the majority of the season filling the Jets starting cornerback positions.

With a revamped depth chart that includes Darrelle Revis, Antonio Cromartie, Buster Skrine and a hopefully healthy pair of youngsters in Dee Milliner and Dexter McDougle at corner, the Jets should be among the best teams in the NFL at blanketing opposing pass-catchers.

For the second season in a row, the aforementioned Coples did a nice job of pressuring the quarterback (11 hits, 21 hurries), but came away with a somewhat disappointing sack total as he got to the QB just seven times.  Joining Coples in the “close but no cigar” category were Sheldon Richardson and Muhammad Wilkerson as the trio were the only Jets to register double-digit hits on the QB with 14 and 10 respectively.

Even Babin and Pace who totaled a mere 8 sacks still racked up 51 pressures and nine hits.  Babin’s 27 hurries were second on the team only to Richardson who led the way with 31.  In all, the Jets were credited with 45 sacks, 57 quarterback hits, and 167 hurries according to PFF.com and NFL.com.  All numbers that should be on the uptick in 2015. 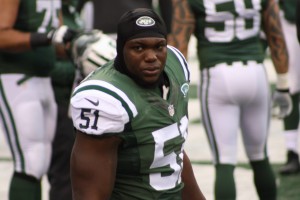 IK Enemkpali hopes to show we he can do coming off the edge.

Enemkpali, an under-sized 3-4 outside linebacker at 6′ 1”, 272 lbs possesses some impressive attributes coming off the edge as he showed excellent burst and short-area quickness in limited playing time under Rex Ryan last season.

More of an all-around player than Enemkali, Trevor Reilly did have some success in college at Utah where he registered 20 sacks in four seasons, eighteen of which came after his freshman year.

The Jets should expect an intense training camp battle between Pace, Babin, Mouldin, Enemkpali, Riley and others as the front-seven could be in a position to overtake the Buffalo Bills who paced the NFL with 54 sacks in 2015.

Should the Jets defense make that leap, it will be due largely in part to Mike Maccagnan taking the time to build a roster that would provide its pass-rushers with plenty time of their own.