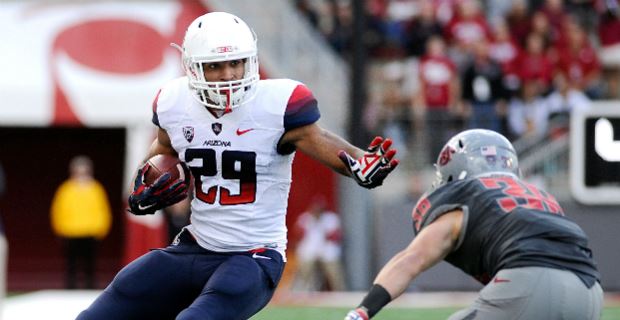 With just a couple of days remaining before the Jets officially kick off their 2015 training camp, Gang Green has brought in an additional wide receiver to compete for a roster spot.

The team has signed undrafted rookie free agent wide receiver Austin Hill, who played three seasons at Arizona where he produced 2310 yards on 151 catches to go along with 17 touchdowns.

At 6′ 3”, 212 lbs, Hill has good size, but has reportedly failed to regain the speed he lost after suffering an ACL injury that forced him to miss the 2013 season.

Should Hill recover fully at any point, he could be an intriguing prospect as he lit up the Pac-12 prior to the injury when he hauled in 81 balls 1,364 yars and 11 touchdowns in 2012.

Here is a snapshot of NFL.com’s pre-draft scouting report as he joins the Jets, becoming the 13th wide receiver on the current roster:

Big and physical. Plays to his size. Runs with attitude after the catch and can take weaker cornerbacks for a ride. Puts defenders on his hip and uses his body to shield them. Good chance lateral quickness improves as he continues to trust his recovery from injury. Dedicated weight-room worker. Possesses strong hands and catching the ball comes easily for him. Effective blocker who can help spring big runs. His 2012 film shows very effective play from the slot.

Suffered ACL injury that knocked him out for all of 2013. Is noticeably slower since his injury. Still hasn’t recovered to his pre-injury form. Personnel men question his vertical speed. Has to gear down to get into his breaks and is inconsistent at getting separation at the top of his route. Lacks suddenness and can be robotic as a route-runner.

Round 7 or priority free agent

Based on the tape, it’s hard to imagine Hill will be able to run a time that will make scouts happy. However, he’s a tough blocker and a reliable, big target who can block in the running game. Hill’s medicals will be scrutinized, but if healthy, he could use his big frame to muscle smaller slot corners.