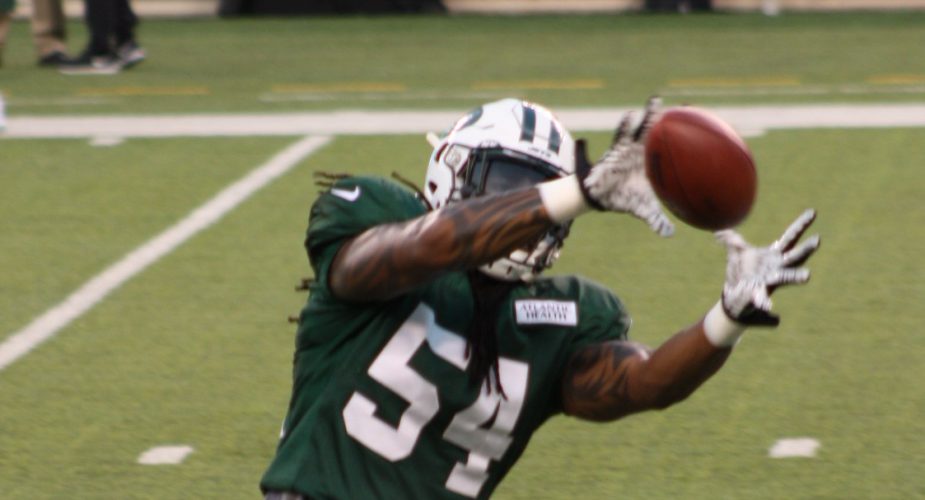 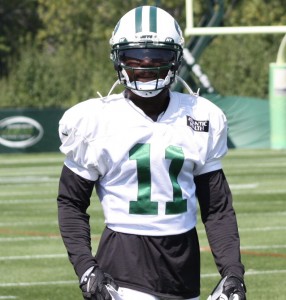 Some ominous skies moved Jets practice indoors yesterday after only a few minutes of stretching outside in front of the season ticket holders who had come out to support Todd Bowles and company.  Here are a few observations from the session.

–  Recently unable to participate in any practices, wide receiver Chris Owusu was out doing some light running.  Owusu was having a strong camp before suffering a concussion but it’s nothing new to him. The receiver had multiple concussions during his collegiate career at Stanford and one has to wonder how much having another one will impact his chances of making the roster.

– Back-up inside linebacker Jamari Lattimore had an interception and he’s racked up a couple of those along with several passes defended throughout camp.  A strong showing for the former Green Bay Packer.

– Several players had the opportunity to work on returning punts but the wildcard remains cornerback Javier Arenas.  It’s a deep group to crack and it’s hard to look past Arenas’ 7 career punt return TD’s in college, but he hasn’t had nearly as much impact as a pro, averaging 9.7 yards per return without a score.

– With Calvin Pryor absent due to a death in the family, returning safety Jaiquawn Jarrett got the majority of Pryor’s reps.

– Antonio Cromartie had a rough start to the session, getting beaten on multiple pass plays, most notably on a double-move by Eric Decker that allowed Decker to easily haul in a Ryan Fitzpatrick pass for a “score”.

Decker beats Cro easily on inside move for 20 yd Grab.

– Added just one day before, tight end Arthur Lynch got plenty of reps and had at least two drops.

Kerley beats Marcus Williams to the inside…15 TD TD.

– Antonio Cromartie had a pass-break-up against Walter Powell shortly before pulling in a pick-six down the right sideline with quarterback Jake Heaps under center.  Heaps was also picked off by Darrelle Revis on the previous play.

–  Undrafted rookie free agent Taiwan Jones, and inside linebacker from Michigan State, nearly came away with the play of the day.  On a pass over the middle in 7-on-7’s, Jones got good elevation to bat the pass down and came up just short of making a diving grab of his own deflection.

– Heaps credited with the longest completion of the day, hitting TJ Graham on a 50-yard bomb with Lyn on the coverage just after overthrowing Devier Posey who had created some separation between himself and Revis down the right sideline.

Heaps overthrows Posey on deep ball…Revis on the coverage.

– Newly signed quarterback Matt Flynn was in attendance but continues to nurse a hamstring injury.

Want to talk training camp or any other jets-related topic?  Log in to join our forums and be  heard.