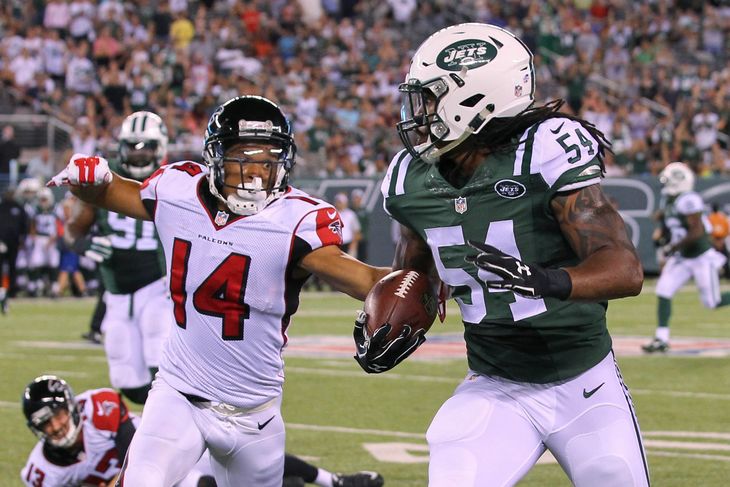 On Friday night the Jets pulled out a 30-22 win against the Falcons. The starters struggled once again on both offense and defense. The starting defense played two drives against the Falcons starting offense. The Falcons opening drive started with a 60-yard completion to fullback Collin Mooney, and ended with a 4-yard touchdown run by Terron Ward. The Falcons second drive began on the Jets four yard line due to a 59-yard punt return by Devin Hester. The Falcons made short work of the Jets starting defense again, cashing in on a touchdown pass to Leonard Hankerson.

The starting offense didn’t perform much better as they were scoreless for their first five possessions, they scored on their sixth and final drive with a 33-yard touchdown rush by Chris Ivory. The scoring drive came against Atlanta’s backups. Ryan Fitzpatrick wasn’t exactly exciting while leading the offense, but he showed his intelligence by being smart with the football. Ryan completed 13 of 19 passes for 118 yards. Although the starting offense wasn’t exactly potent, they didn’t turn the ball over which is certainly a step in the right direction.

While the starters struggled, the backups maintained control of the last two and a half quarters, showing that the Jets have great depth at most positions. Leonard Williams sparked the team with a safety of quarterback T.J. Yates, and finished the game with five total tackles and one and a half sacks. Bowles acknowledged Williams’ big night, “He had two big plays… You saw the big plays, but I gotta look at the film to see how he did on every other play. But he did make two big plays and kind of turned on the light for everybody.” The Jets responded to the Falcons first 14 points with 30 unanswered points of their own. The Falcons rallied late in the game, but came up eight points short.

This was a good game for certain players fighting to make the team, a number of players improved their stock against the Falcons. Players who stood out include: Leonard Williams, Jamari Lattimore, Bryce Petty, Jason Babin, Rontez Miles, and Bilal Powell. It’s tough to pick only one play for the play of the game, but Leonard Williams’ safety has to be the choice due to the huge impact it had on the game. Other big plays were Jamari Lattimore’s interception for a TD, Rontez Miles’ fumble recovery returned for a TD, and Bryce Petty’s TD toss to DeVier Posey.

After three weeks on the sidelines, Muhammad Wilkerson finally returned to practice on Sunday. Wilkerson has been out due to hamstring issues or “tightness.” Some have speculated that Wilkerson was staying out of practice due to the slow pace of his contract negotiations with the Jets. Those who know Wilkerson though, know that he puts the team first and wants to be on the field with his teammates.

Wilkerson worked exclusively with the backups during his first day back at practice, but moved around well and didn’t have any issues. When Wilkerson was asked about his return to the practice field he said “I need practice reps to get in the flow with my teammates… I haven’t been out there in weeks, the guys are installing and I haven’t been out there. I need to catch up a little bit.”

If all goes well, Jets fans can expect to see Wilkerson make his preseason debut against the Giants this Saturday. Wilkerson could see the field for a good amount of time with the starters expected to play for at least the first half. Todd Bowles expressed optimism about Wilkerson playing Saturday “He’s feeling a lot better… He’s moving pretty good, we’re bringing him along slowly, but he’ll practice this week. Pending any setbacks, he’ll play this weekend.” Wilkerson, who’s contract expires at the end of the season, has said he will table any contact negotiations if an agreement isn’t reached before the beginning of the regular season.

The Jets committed 17 penalties during the game against the Falcons, and Todd Bowles took notice. During the Jets practice at Hofstra University Todd Bowles told the officials to “call anything, even if the wind blows.” Needless to say, there were a lot of penalties called. Bowles is trying to clean up the mistakes before the last preseason game with the starters. There was a huge difference in the number of penalties between week one and week two. Week one the Jets committed three penalties, they jumped to 17 in week two.

The Jets signed quarterback Matt Flynn, who won’t see any playing time Saturday against the Giants. Flynn is recovering from a hamstring injury. The best case scenario for Flynn is to see a good chunk of starting time in the Jets final preseason game against the Eagles. The Jets also claimed tight end Arthur Lynch off of waivers, and waived punter Jacob Schum. The Jets signed another tight end on Monday in Matt LaCosse, and waived injured defensive lineman Davon Walls.

The injuries continue to mount for the Jets, there were a few during the game against the Falcons and a couple during Sunday’s practice at Hofstra. Both linebackers Calvin Pace (strained groin) and Lorenzo Mauldin (sprained knee) were injured within 24 hours of each other. Other players still recovering from injuries include: Ben Ijalana (sprained MCL), Jace Amaro (sprained shoulder), Devin Smith (broken ribs), Jeremy Kerley (concussion), Geno Smith (broken jaw), Erin Henderson (sprained MCL), Dee Milliner (wrist), Matt Flynn (hamstring), Stevan Ridley (knee), Ronald Talley (strained groin), Kevin Vickerson (hamstring), James Brewer (back), Curtis Brown (hamstring), Shaq Evans (sprained back),  Durell Eskridge (concussion), Daryl Richardson (concussion), and Dashaun Phillips (ribs). Clearly the injuries are mounting for the Jets, who hope to see some of their players return soon. Calvin Pryor is still out due to a death in the family as well.

On a positive note, Chris Owusu made a return to practice wearing a red jersey and made some nice catches. Obviously, Muhammad Wilkerson also made a return to practice. The Jets were hurting for Wilkerson to return after taking some hits on the defensive line. The Jets will hope to get some of their players back in the near future to test their depth throughout the last two preseason games. The Jets will need to trim their roster from 90 players to 75 on September 1st.