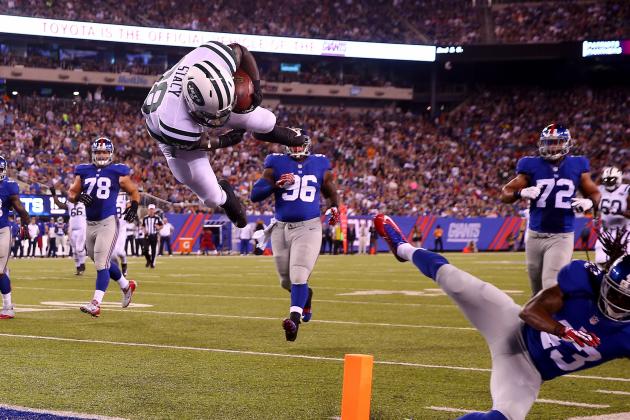 After struggling in their two first preseason games, the Jets starters came to play Saturday night against the Giants. Both the offensive and defensive starters looked in sync as the Jets ended the first half with a 21-7 lead. After the half, Bryce Petty and the backups took over. The Jets would go on to win the game 28-18. Ryan Fitzpatrick ended the night going 9 for 14 with 127 yards passing and two touchdowns. The game against the Giants was likely the last time any of the starters will see the field until week one of the regular season. Fitzpatrick finished the preseason with impressive numbers on paper: 24 for 36, 261 yards, two touchdowns with no interceptions, and a 106.4 passer rating.

The starting defense made significant strides against the Giants as well, never allowing a play for over 19 yards the entire first half. The defense looked much more cohesive than the previous two games, with vast improvements in tackling and communication. The Jets were still a little loose when it came to penalties, committing eight for 50 yards, but it’s still an improvement over last week’s 17 penalties for 125 yards.

This was by far the best game of the preseason for the Jets, and there were plenty of highlight moments. Players who made impact plays, and had a solid game include: Eric Decker (with the exception of a muffed punt), Walter Powell, Antonio Cromartie, Trevor Reilly, Leger Douzable, and Zac Stacy. The play of the game was Antonio Cromartie’s pick-6, Cromartie needed the boost after having a shaky training camp and preseason. Other big plays were Eric Decker’s 18-yard touchdown reception from Fitzpatrick, Walter Powell’s 54-yard punt return for a touchdown, and Zac Stacy’s 24-yard screen pass reception for a touchdown.

One of the surprises from the first round of cuts has to be wide receiver DeVeir Posey, he came on the last two preseason games with a touchdown reception against the Falcons and four receptions for 39 yards against the Giants. Another surprise cut is cornerback Javier Arenas who was never really given a shot to get a roster spot by the Jets. Arenas is a well traveled veteran who could have provided some more depth for the cornerback position.

Nearly half of the Jets cuts came at the wide receiver position. That leaves three players at the position who are still battling it out to make the 53-man roster. Brandon Marshall, Eric Decker, Devin Smith, Jeremy Kerley, and Quincy Enunwa all seem to be locks to make the roster. Kerley has seen significantly less playing time so far this season, but recently signed a contract extension and Quincy Enunwa looks to be the front-runner for the slot position. Most likely there will be one more spot left for a wide receiver on the 53-man roster and Chris Owusu, Walter Powell, and Shaq Evans will have to fight for that sixth spot.

Leonard Williams gave Jets fans a scare Saturday night after suffering a knee injury and heading to the locker room with trainers. Williams walked off without a limp, implying the injury wasn’t too serious. It was confirmed Sunday after an MRI that Williams didn’t suffer any ligament damage, and only sustained a muscle strain. His availability for week one of the regular season is still in question, but hasn’t been ruled out either. If he’s healthy, Williams will start at defensive end for Sheldon Richardson while he serves a four game suspension for violating the league’s substance abuse policy.

After the game Muhammad Wilkerson said “I’m fine, I just need reps, that’s all.” Wilkerson recorded 3 total tackles, and half of a sack in his only preseason game. This is a positive sign for the Jets after Wilkerson missed nearly a month of training camp and the first two preseason games with a nagging hamstring injury. If Leonard Williams is healthy by week one the Jets will have a Wilkerson-Harrison-Williams trio starting on the defensive line, not too bad considering defensive end Sheldon Richardson will be out.

The Jets will have to cut three more players before the 75-man roster deadline on Tuesday. The final 53-man roster deadline is September 5th, giving the Jets a short time to make their decisions on the final cuts. The Eagles will come to MetLife Stadium for the fourth and final preseason game, giving Todd Bowles one more game to evaluate his roster and make some tough decisions. The game against the Eagles is on Thursday, and the Jets will need to make the move to a 53-man roster by Saturday.