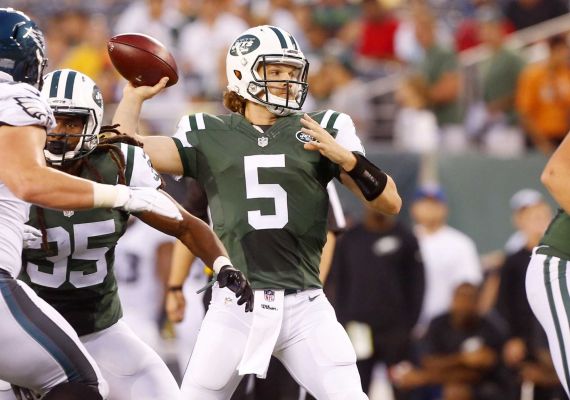 The Jets finished the preseason with a 3-1 record, good enough to end the preseason leading their division. Obviously winning the division in the preseason means nothing, but it’s a nice start to Todd Bowles’ rookie head coaching campaign. With all of the starters sitting in the preseason finale, Matt Flynn and Josh Johnson led the Jets to a 24-18 victory against the Philadelphia Eagles. Flynn finished the day going 10 for 14 with 136 yards passing and two touchdowns to one interception, Josh Johnson went 7 for 12 with 82 yards passing and added 76 yards rushing. Both quarterbacks were released after the Jets made their final round of cuts down to the 53-man roster.

The game against the Eagles had many highlights, unfortunately some of the players who made impact plays are no longer on the roster. Players who stood out include: Darrin Walls, Chris Owusu, Walter Powell, Deion Barnes, Zac Stacy, and Matt Flynn. The play of the game was Matt Flynn’s 18-yard touchdown pass to Chris Owusu. Other plays worth nothing were Walter Powell’s 57-yard kick return negated by a penalty, Daryl Richardson’s touchdown, both of Darrin Wall’s interceptions, and Zac Stacy’s second touchdown reception of the preseason.

Both Sheldon Richardson and Oday Aboushi were put on the suspension list, four weeks and one week respectively. Richardson’s suspension was due to violating the league’s substance abuse policy, he may be in for a longer suspension depending on the league’s decision on whether or not to penalize him for his recent arrest. Aboushi was recently stopped by police and charged with possession of marijuana, resulting in his one game suspension. Dee Milliner was placed on short-term injured reserve, meaning he will be eligible to return after eight weeks. Stevan Ridley was placed on the PUP list, meaning he will be eligible to return after six weeks.

There were a few surprises from the Jets’ final round of cuts. Wesley Johnson who looked to be the backup center behind Nick Mangold was among those cut, he must have underwhelmed. The Jets will go into the season without a backup center on the roster as of right now. Another surprise was the release of KR/PR Walter Powell who flashed in multiple games during the preseason. The Jets decided to resign Chris Owusu, who also spent time returning kicks for the Jets. Owusu looked better as a receiver, but didn’t have as many explosive returns as Powell. The final surprise was the decision not to keep either Matt Flynn or Josh Johnson. Without another quarterback, Bryce Petty will be the backup to Ryan Fitzpatrick until Geno Smith returns from his injury.

Geno Smith participated in positional drills on Monday for the first time since his injury. When speaking to the media Smith refused to address any questions regarding his altercation with former teammate IK Enemkpali other than the fact that he won’t press charges against him. When asked about his recovery Smith said “It’s been tough. The most disappointing part is not being able to practice and play. Everything else takes care of itself, I’m not putting my mind in a place where it shouldn’t be.”

Leonard Williams made a change with his jersey number from 62 to 92. Williams wore 62 all of training camp, and the preseason but chose to make the change before the beginning of the regular season. While 92 is a more recognizable number for a defensive lineman, some Jets fans may be upset at the late change seeing as Williams’ jersey has been on sale with the number 62. A former Jet some of you may be familiar with also wore 92, and was referred to as “big cat.” That former Jet was none other than Shaun Ellis.

The Jets are starting to get more healthy as week one of the regular season approaches. Jeremy Kerley, Calvin Pace, Lorenzo Mauldin, and Leonard Williams all participated in practice. This bodes well for all of their chances to participate in the season opener. Jeremy Kerley will likely assume punt return duties and see some time in the slot, while Chris Owusu will be the likely candidate for kick returns. Calvin Pace will start at outside linebacker, but don’t be surprised if Mauldin snags the starting gig from him sometime during the season. Leonard Williams will start in place of Sheldon Richardson at defensive end while he serves his suspension. If Williams produces at a high level, you can expect to see Bowles doing his best to keep him on the field in four defensive lineman formations once Richardson returns.

The Jets still seem to have a couple of areas with room for improvement, albeit somewhat minor areas. With the final roster in place, the Jets could still use some more talent at the tight end position with the loss of Jace Amaro for the season. Chris Owusu isn’t exactly tantalizing at kick returner either. It’s possible the Jets could make a move to either pickup a free agent or trade for an insurance player before the first game of the season. The Jets will take on the Cleveland Browns at home on Sunday, September 13th.

By John Viscardi
Posted on September 8, 2015