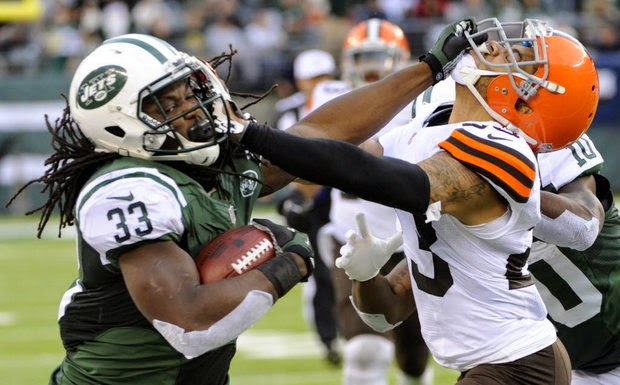 The Jets’ defense got off to a slow start in the first quarter, and part of the second allowing Josh McCown and the Browns’ offense to march 90 yards on their first drive. Luckily Calvin Pryor forced a fumble while McCown was attempting to dive into the Jets’ end zone, and Antonio Cromartie was able to recover it. The Browns chewed up the clock on their first drive using nearly 10 minutes of the first quarter. Josh McCown suffered a concussion on the play, and didn’t return to the game. Johnny Manziel would come in for Josh McCown, and scored a touchdown on his first drive at the helm, tossing a 54-yard touchdown pass to Travis Benjamin.

Fortunately for the Jets, the touchdown pass to Benjamin was Manziel’s highlight of the day as the defense clamped down on the Browns’ offense about half way through the second quarter. The Jets’ defense took advantage of Manziel’s struggles in the second half, he threw an interception and gave away two fumbles. David Harris and Muhammad Wilkerson both had a sack, while Trevor Reilly had a strip sack of Manziel. Reilly recorded his first career sack against the Browns. The Jets looked in control of the game the entire second half, keeping the Browns from scoring any points.

The Jets’ offense sputtered on it’s first two drives, but put seven on the board with a somewhat strange third drive. On the fourth play of the drive Ryan Fitzpatrick’s pass intended for Brandon Marshall was intercepted by Tashaun Gipson, only for Marshall to rip the ball from Gipson’s hands and recover the fumble. It was a surreal chain of events, and great effort by Marshall to not give up on the play. Ivory would go on the next play to catch a pass from Fitzpatrick for nine yards and a touchdown only to have it called back by a holding call. Ivory shook off the penalty, and rumbled downfield for a touchdown on the next play.

The Jets finished the half by going 72 yards in nine plays with 2 minutes and 39 seconds left. Brandon Marshall came to life on the Jets’ final drive of the half with three receptions for 26 yards, and Eric Decker grabbed the 15 yards bullet pass in the end zone for the touchdown. The offense would continue to play well for the rest of the game with Brandon Marshall scoring on a one yard touchdown pass, Chris Ivory getting his second touchdown, and Nick Folk converting on a 34-yard field goal. Ryan Fitzpatrick had a solid outing, and put up respectable numbers: 15 of 24 for 179 yards with two touchdowns to one interception. The ground game was impressive as well: Ivory had 20 rushing attempts for 91 yards and two touchdowns, while Bilal Powell had 12 rushing attempts for 62 yards.

This was a game full of highlights. While the Jets started somewhat slow and dealt with a couple of serious injuries, it was an overall good performance with multiple impact players. Impact players of the game include: Chris Ivory, Brandon Marshall, Marcus Williams, Damon Harrison, David Harris, and Ryan Fitzpatrick. It’s difficult to choose one play for the impact play of the game, but it had to be Eric Decker’s 15-yard touchdown reception from Fitzpatrick at the end of the first half. The touchdown gave them a 14-10 lead, and the momentum going into the half. There were numerous other impact plays in the game, the ones that stood out were: Both of Chris Ivory’s touchdown runs, Marcus Williams’ interception, Brandon Marshall’s touchdown reception, Brandon Marshall’s forced fumble/fumble recovery, Calvin Pryor’s forced fumble, Trevor Reilly’s strip sack, and Lorenzo Mauldin’s forced fumble that was recovered and returned for 17 yards by Darrelle Revis, as well as a few others.

Antonio Cromartie had a shaky start to the game against the Browns and gave up a couple big plays, namely the 54-yard touchdown pass to Travis Benjamin. In the second quarter Cromartie went down on a non-contact injury which looked eerily similar to Darrelle Revis’ season ending injury with the Jets before he was traded to the Tampa Bay Buccaneers the following season. Cromartie was turning while in coverage and planted his foot awkwardly, his knee buckled and he went straight to the ground. Cromartie was grabbing his leg in pain on the turf for a couple of minutes until he was helped off by trainers and carted into the locker room. This is a huge blow to the Jets secondary seeing as they just signed Cromartie to a four year, $32 million dollar deal in the offseason. Luckily for the Jets the “next man up,” Marcus Williams, had an impressive performance. The severity of the injury isn’t known yet, but Cromartie is scheduled for an MRI sometime Monday.

On the rookie’s one impact play of the game, Lorenzo Mauldin suffered a terrifying head injury. Mauldin was able to knock the ball out of Johnny Manziel’s hands while he was being sacked by Muhammad Wilkerson, and at first there wasn’t any visible injury to Mauldin. After the play Mauldin got up, took a couple steps, and fell face first into the turf. Once a player noticed Mauldin was down, he called the medical staff over. After minutes of laying motionless on the turf, Mauldin was strapped down and carted off. There was an ambulance waiting outside the stadium to take Mauldin to the nearest local hospital, and the outlook seemed grim. Later that Sunday night it was made clear that Mauldin hadn’t suffered a neck injury, and had only sustained a concussion. Mauldin appears to be okay, but will remain in the hospital overnight. After giving everyone a scare, it’s a relief for the Jets to hear he’s alright. Calvin Pryor expressed his concern for the rookie saying: “It was very scary, his eyes were closed.”

Nick Folk’s contract was restructured recently to free up some cap room. $1.78 million dollars of Folk’s $2.5 million base salary was restructured as a signing bonus. This gives the Jets another $1.19 million dollars in cap space this season. According to overthecap.com, the move puts the Jets at $2.17 million under the team’s salary cap. After having over $50 million dollars to work with, that can barely be justified as “wiggle room.” The Jets will have tough decisions to make after the season with some big name players becoming free agents such as Damon Harrison, Demario Davis, and potentially Muhammad Wilkerson just to name a few.

It looks like Muhammad Wilkerson won’t receive his new contract from the Jets any time soon, if at all. There have been talks that Wilkerson will table any negotiations once the season begins, and it has. The Jets and Wilkerson’s camp have different views as to how much Wilkerson is actually worth in terms of guaranteed and overall salary. The Jets could potentially franchise tag Wilkerson in the offseason, but that won’t come cheap either, with around a $16 million dollar price tag. The Jets do have first round draft pick Leonard Williams, but at this point he’s an unproven commodity.

There were a few number changes that took place over the week. The most talked about change was Leonard Williams’ switch from 62 to 92 in honor of former Jets defensive end, Shaun “Big Katt” Ellis. Some other number changes were: Devin Smith from 84 to 19, Zac Stacy from 38 to 30, Darrin Walls from 30 to 26, and Quincy Enunwa from 82 to 81. Devin Smith will hope to make his regular season debut against the Colts after having practiced through the week. The Jets will look to carry momentum from their win into next week against the Colts in Indianapolis on Monday night.