Two games into the 2015 season, the Jets find themselves sitting at 2-0 on the strength of an outstanding defense, quality quarterback play and a strong running game.  Up to this point, the ground attack has been led by Chris Ivory who has 144 yards and two touchdowns on 34 carries (4.4 YPC) and Bilal Powell, 24 carries for 100 yards (4.2 YPC).

With week three looming, a third name is expected to be added to the list this Sunday in former St. Louis Rams running back, Zac Stacy. Stacy’s exact role won’t be known until kickoff as Ivory is a game-time decision with a quad injury, but Stacy is expected to either lighten the load for Ivory if he’s active, if not, he’ll be asked to carry a heavier load himself as the Jets will look to sustain time-consuming drives against Chip Kelly’s overworked defense.

As a third option, you won’t do a whole lot better than Stacy when considering his youth, experience, production, running style and versatility. 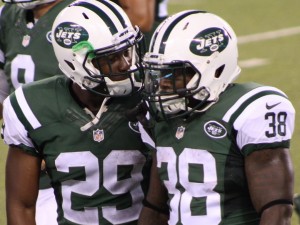 Stacy will look to join the RB rotation with Bilal Powell this Sunday.

At just 24 years old, the former Vanderbilt product has 28 NFL games under his belt (17 starts) and managed to churn out 1,266 yards on 326 carries (3.9 YPC) and 8 touchdowns.  Hardly All-Pro numbers, but Stacy operated in an offense with little stability at the quarterback position, and few other playmakers on a struggling offense.  Even still, the back has had his share of eye-opening performances.

Specifically, the 5′ 9”, 225 lbs, Stacy who runs hard with a low center of gravity put those attribures on full display in a 2013 contest against the eventual Super Bowl champion Seattle Seahawks, the consensus number-one defense in the NFL.  Against Seattle, he ran hard between the tackles, carrying the ball 16 times for 134 yards.  Stacy also brings experience as a kick returner, a role Todd Bowles has said Stacy may be asked to fill.

Acquired by Jets General Manager Mike Maccaganan during the NFL draft, Stacy was made expendable when St. Louis selected running back Todd Gurley in the first round of this year’s draft and the Jets parlayed the 7th round pick they acquired from the Chicago Bears in their deal for wide receiver Brandon Marshall to give Stacy a home in New York.

Now, with a banged up Ivory and an opponent who asks their defense to play upwards of 80 snaps per week, Stacy and his powerful running style will look to take advantage of the opportunity that’s increasingly likely to be presented to him in his Jets debut tomorrow at MetLife Stadium.