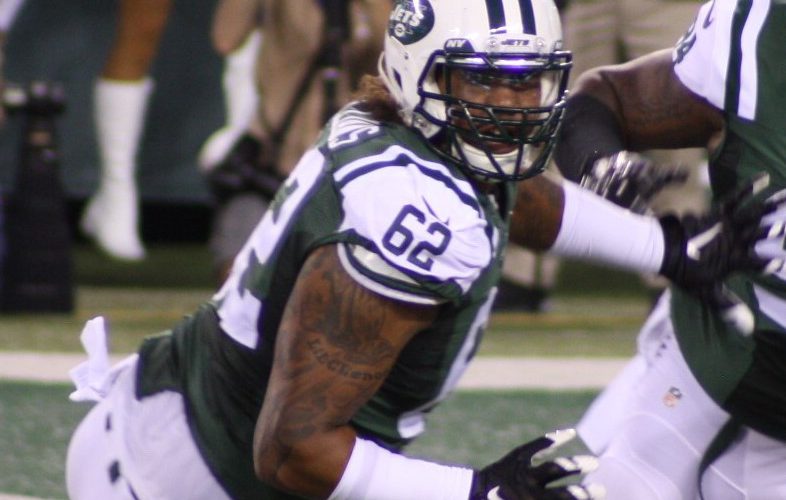 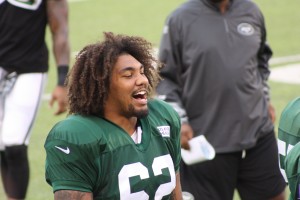 As the New York Jets prepare to  take on the Washington Redskins this Sunday at Metlife Stadium, you can’t help but think back to draft day when the pair of franchises made two of the more shocking selections at the top of the first round.

The Jets, already armed with one of the league’s top defensive lines, took a step toward building what they hope will be the best unit in the NFL when they chose USC defensive lineman Leonard Williams with the sixth overall selection.

Viewed by some as the most dominant player in the draft, how the Jets wound up landing Williams was incomprehensible to some onlookers.  For a player of his caliber to fall to number six, a team ahead of the Jets was going to have to make a surprise pick before Gang Green was on the clock, and that team was the Redskins.

Most teams stuck to “the script” on draft day when Tampa Bay and Tennessee, selecting 1st and 2nd respectively, went with the much-anticipated picks of quarterbacks Jameis Winston and Marcus Mariotta in that order.

When the Jacksonville Jaguars were up at number three, many expected them to address the defensive side of the ball and select Williams or one of the top-tier pass-rushers.  In the end, they passed on Williams and went for an edge rusher in Florida’s Dante Fowler Jr.

Always known for taking explosive wide receivers, the Raiders were up next.  The only question for most pundits was whether they would select Alabama’s Amari Cooper, or West Virginia’s Kevin White.  The Raiders went with the more accomplished Cooper. 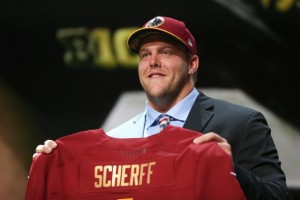 The Redskins chose offensive lineman Brandon Scherff with Leonard Williams still on the board.

With Williams still on the board and the Redskins having holes up and down their roster, this is where some analysts had the USC product going.  It was an opportunity for a team that was low on talent to add perhaps the single most talented player on draft day.  Instead, Washington made a splash by taking the top-graded offensive lineman in the draft, Brandon Scherff out of Iowa.

Scherff, A college tackle who many projected to guard at the pro level, was going to be a tackle in the eyes of the Redskins.  Their plan was to start Scherff on the right side but he has since been moved inside to guard as Head Coach Jay Gruden feels the unit is better off with Morgan Moses lined up at tackle while grooming Scherff at guard.

With that configuration, the Redskins currently rank 12th in rushing (121.8 YPG) while allowing just six sacks of quarterback Kirk Cousins.

According to NFL statistical tracking web-site pro football focus, Scherff is currently ranked 32nd among NFL guards with an overall grade of 69.7.  It’s worth noting, however, that Scherff has seen consistent increases from week to week.

So while Scherff has been juggled a bit in the early going, Williams has had the luxury of being broken in on a defensive line that allows him to face very few double-teams, and the early results have validated those who raved about him before the draft.

While he has garnered just a half a sack, Williams has put consistent pressure on opposing quarterbacks while emerging as a force against the run.

Those wondering just how Williams is progressing need to look no further than the Jets most recent match-up against the Miami Dolphins in London.

Williams was re-routing Miami running backs as he picked up a tackle for loss and five quarterback hits to go along with four hurries.

The stellar outing from Williams earned him an overall PFF.com grade of 82.6, and put him second only to Muhammad Wilkerson among Jets defensive linemen for the season, at 83.6.  That places Williams not only second on the Jets, but 16th among all NFL interior linemen.

So while Scherff has been shuffling around the ‘Skins line and Williams has been dominating the opposition, there’s plenty of time for each player to make an impact at their respective positions.

This Sunday at MetLife Stadium however, the two should spend their fair share of time doing battle with one another, giving each team a chance to look back and wonder “what could have been” had the Redskins not made the unconventional selection of Scherff, leaving Williams there for the taking for Gang Green.