New Tandem in the Middle for Jets Defense on the Horizon?

Are Demario Davis’ days as an every-down  inside linebacker over?  If yesterday’s win against the Miami Dolphins is any indication, it appears that could be the case.

Davis played a season-low 36 snaps, while off-season free agent addition Erin Henderson saw his snap count jump to a season-high of 30, primarily coming in on passing downs as 25 of his 30 reps were in passing situations according to PFF.com.

Henderson finished the game with 5 tackles (4 solo) while Davis had 4 (3 solo) of his own, low totals that weren’t helped by the fact that the Dolphins had just nine rushing attempts as a team.

We speculated earlier this week about the status of Davis and others when Todd Bowles said there would be no lineup changes which was true, but there was clearly an adjustment made to compensate for Davis’ struggles in coverage for much of the season by inserting Henderson on passing downs. 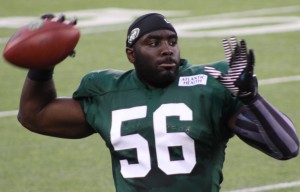 Henderson’s performance yesterday and in the coming weeks could play a major role in the future of the inside linebacker position for the Jets defense.

Should Henderson impress Jets brass down the stretch, they may seek to minimize roster turnover and retain the seven-year veteran who started 33 games for the Vikings between 2011 and 2013, racking up 263 tackles (163 solo), 8.5 sacks and 5 forced fumbles.

When asked about the increased role for Henderson immediately following the game, Head Coach Todd Bowles said that Henderson had “earned it” through his hard-working practice habits.

While the Jets try to string together a few wins to stay in the playoff hunt, the snap count between Davis and Henderson is worth keeping an eye on as it could play a role in shaping the position moving forward.