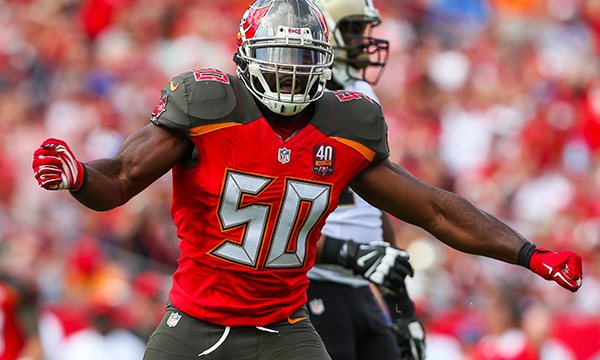 After hosting veteran linebacker Bruce Carter last week, it appears a deal may be imminent between the Jets and the former second-round draft pick.

Barring any unforeseen circumstances, former #Bucs and #Cowboys LB Bruce Carter is expected to sign with the #Jets.

Jenna Laine of Sports Talk 1040 in Tampa is reporting that Carter is expected to sign with Gang Green “barring any unforeseen circumstances”.

Carter could be more than just a depth signing if given the opportunity to compete with Erin Henderson for the starting job alongside David Harris in the middle of the Jets defense.

After being chosen in the 2nd round of the 2011 NFL draft by the Dallas Cowboys, Carter appeared in 10 games as a rookie, but was called on to start 24 contests over the course of the following two seasons, racking up 178 tackles, 3 sacks and 5 interceptions.  The five interceptions were all during the 2014 season.

After signing with the Bucs as a free agent after the 2014 season, Carter started just three games before losing his spot to rookie linebacker Kwon Alexander.

If he does come on board, don’t be surprised if he ends up stealing reps from Erin Henderson, the same way Henderson did to last season’s starter Demario Davis as the season progressed.

UPDATE:  The Jets and Carter have reportedly come to terms on a one-year contract.  Financials are unknown at this time.