Geno Turning Heads on and off Field in OTA’s 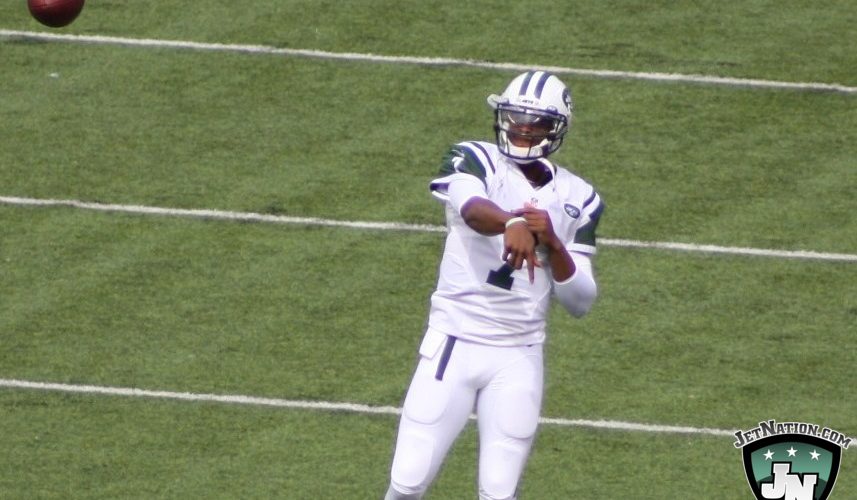 It’s an unfortunate set of circumstances for Geno Smith, really.  Here we are, months removed from the 2015 football season, anxiously awaiting the start of OTA’s to hear about which players are impressing and which one aren’t, then the on-field action gets overtaken by the business side of the game. At the moment, the headlines have been stolen by Eric Decker skipping the sessions to support Ryan Fitzpatrick’s contract situation and the Jets’ reported offer to the veteran QB.

Even still, OTA’s are under way and there have been a few noteworthy observations made by Jets scribes.

Smith has apparently looked sharp for the most part, while also stating his case for an opportunity to make a case for himself according to Kimerly Martin of Newsday.

One ongoing issue with Smith however, has been his maturity, or lack thereof.  Smith was being baited by one member of the press and took it.  Hook, line and sinker.  After a series of clearly uncomfortable questions regarding Ryan Fitzpatrick and his return, Smith stopped fielding questions from the reporter, repeatedly saying “next question” each time the reporter was in the middle of asking a follow-up question.  It was an uncomfortable situation, but one Smith should have anticipated and handled better.

It’s an antagonistic move from the reporter, but Smith has to realize that this is a a market that’s going to put him in those types of situations.  If he hasn’t gotten it after three years, will he ever get it?

What happened with Geno Smith and a reporter in the locker room yesterday? https://t.co/HNOJwkvX4g pic.twitter.com/oOvry4Pctk

After all, unless quarterback Ryan Fitzpatrick re-signs before Smith’s next media session, he’s sure to be bombarded with questions regarding his top two targets, Brandon Marshall and Eric Decker being absent from OTA’s, with Decker doing so in support of Fitzpatrick.

Offensive coordinator Chan Gailey also spoke to the media, trying to express the difficulty of evaluating players after just two days of OTA’s and taking a moment to  discuss the quarterback situation.  Just as he does with his offense, Gailey simplified many of his answers, especially when asked about who his quarterback will be, simply saying “I coach who comes through the door”.

Naturally, there was plenty of interest in second-round rookie quarterback Christian Hackenberg who, according to Rich Cimini of ESPN New York, spent his time on the second field with the other rookies while he learns the playbook and gets familiar with the pro game.

As far as how Geno Smith looked, there were several tweets from various reporters praising his accuracy throwing the deep ball, hitting Kenbrell Thompkins for a long score over Marcus Williams at one point, and all QB’s being on target for the most part which is to be expected while running drills in shorts.

In QB-WR drill vs. no defense, all three QBs were mostly on target with their throws. Hackenberg threw one a bit high. #Jets

One player who stands to benefit from the absence of Marshall and Decker is rookie wide receiver Charone Peake.  According to Dom Cosentino, he was the only offensive rookie getting a look on field #1 with the starters and primary back-ups.

WR Charone Peake appears to be the only rookie getting work on field #1. #Jets

Trying to help keep things in perspective, Kristian Dyer of USA Today reminded us that not much good press was heading Ryan Fitzpatrick’s way this time last year, and all he did was go out and throw more touchdowns than any other quarterback in the history of the franchise.

Praises for Geno at start of OTAs but remember the bad press about Fitz this time last year? Then has one of best seasons in #Jets history.

It’s still about as early as early can get in terms of football season starting, but that doesn’t mean teams and players aren’t already under the microscope.  It wouldn’t be the Jets if they weren’t doing something like trying to decide between a journeyman quarterback, and a three-year pro who has registered 43 turnovers in just 31 career games.

OTA’s resume on May 31st- June 2nd per ESPN.com