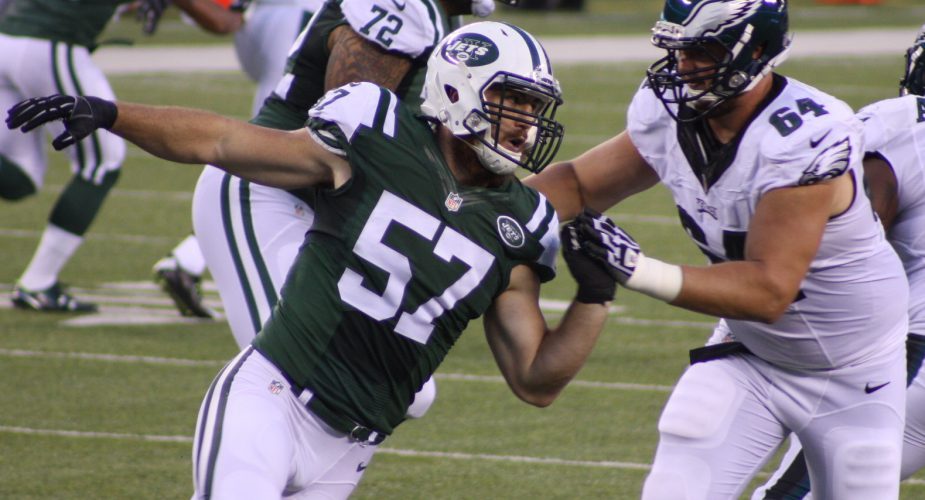 Hard to believe as it may be, but a look up and down the New York Jets depth chart at the outside linebacker position reveals third-year pro Trevor Reilly as being the elder statesman in the group, given the departure of long-time outside ‘backer Calvin Pace and the in-season dumping of Quinton Coples who started opposite Pace for each of the past few seasons.

By saying goodbye to Pace and Coples while choosing Jordan Jenkins in this year’s NFL draft and Lornezo Mauldin last year, this may be Reilly’s best chance to get on the field for Gang Green in an expanded role.

The team has made it clear that they expect big things from Mauldin this season, and Jenkins is viewed by many as  a “plug and play” starter from day one.  However, expectations are often trumped by reality, and the reality for the Jets at the outside linebacker position is that there are no entrenched starters at this point, so Reilly will hope to play well enough in camp to either earn a starting spot, or to play more than the 79 snaps he saw last season.

The former Utah product was enjoying a strong training camp last season and picked up a sack in the Jets opening week 31-10 victory over the Cleveland Browns when he was on the field for 19 defensive plays.  That, however, would be his highest snap count for the season, hitting double digits only once after week three when he played 10 snaps in the team’s 30-8 vicotory over the Tennessee Titans.

In fact, Reilly saw zero snaps on defense more times (6) than he saw double-digit reps (4) but he was a mainstay on special teams, tying linebacker Erin Henderson for the team lead with 13 tackles on coverage units.

As a player with little in-game experience who was chosen by the Jets previous regime, Reilly is the underdog in this scenario, but that’s not an unfamiliar position for the 6’ 5” 245 pounder who walked on at Utah as a defensive end before shifting to linebacker.  By the time he wrapped up his collegiate career, Reilly had amassed 235 tackles, 20 sacks, 37.5 tackles for loss and a spot on the All Pac-12 team as a defensive end during is senior campaign.

A high-energy player who contributes on special teams and can chip in along the defensive line in sub-packages, betting against Reilly to find himself starting for the Jets at some point this season may not be  a wise move.