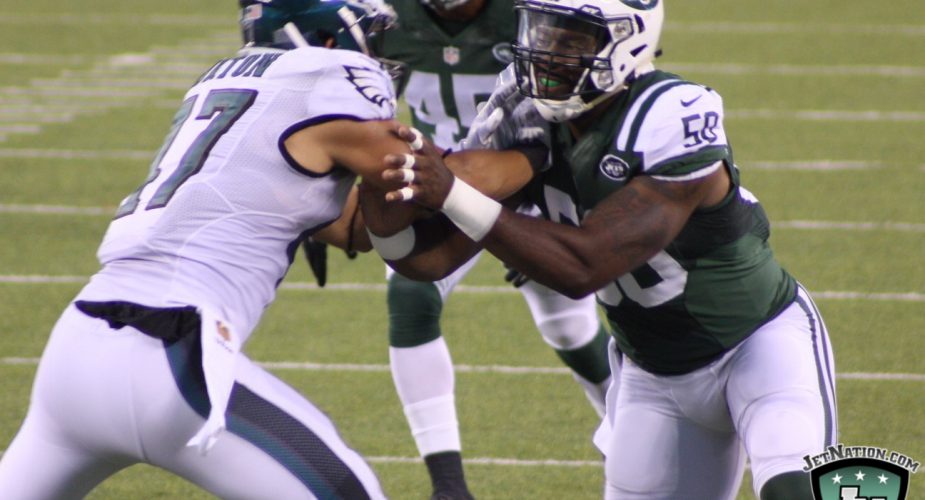 With plenty of hype surrounding the New York Jets’ overhauled linebacker position due to the addition of first and third round draft choices Darron Lee and Jordan Jenkins respectively, it looks like a JetNation.com favorite from last season’s crop of undrafted rookie free agents is opening some eyes as training camp approaches. 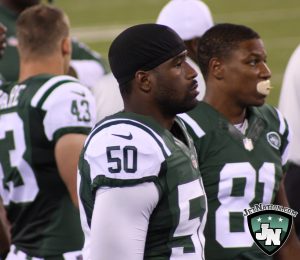 The undrafted Barnes stuck on the Jets practice squad in 2015.

Former Penn State University defensive end/linebacker Deion Barnes first caught our eye last season in Florham Park before any games pre-season games were played, and then again when the exhibition season kicked off against the Detroit Lions.  Barnes topped our list of the Jets most impressive undrafted free agent performers as the pre-season came to a close and wound up sticking with the team’s ten-player practice squad.

Barnes didn’t see any time on the active roster, but it appears the time he spent with the team and his off-season training program has elevated him in the eyes of the current coaching staff according to Connor Hughes of USA Today.

Hughes quoted Jets linebacker coach Mark Collins who was asked about the progression of Barnes after his rookie season and he didn’t mince words in his reply.  “In a year’s time, he’s probably the most improved player at any position.”  High praise for a team loaded with young talent on the defensive side of the ball.

Barnes had an up and down career as a Nittany Lion, bursting on to the scene as a freshman and picking up 6 sacks and 10 tackles for loss. He would see his production slip in year two to 2 sacks and 4 TFL’s before a resurgent 2014 that saw him pick up another 6 sacks while posting a career-best 12 TFL’s and 44 tackles, also a personal high.

After moving around from linebacker and the defensive line in college, the Jets put Barnes at the outside linebacker spot in their 3-4 scheme, a spot that his NFL.com scouting report projected him as.

The early reviews on Barnes were good last season, and have clearly gotten even better in 2016.  With plenty of competition at outside linebacker due to the emergence of Lorenzo Mauldin, drafting of Jordan Jenkins to go along with holdover Trevor Reilly and CFL import Freddie Bishop, Barnes is going to have to continue fighting an uphill battle.  A battle he appears to be winning thus far.