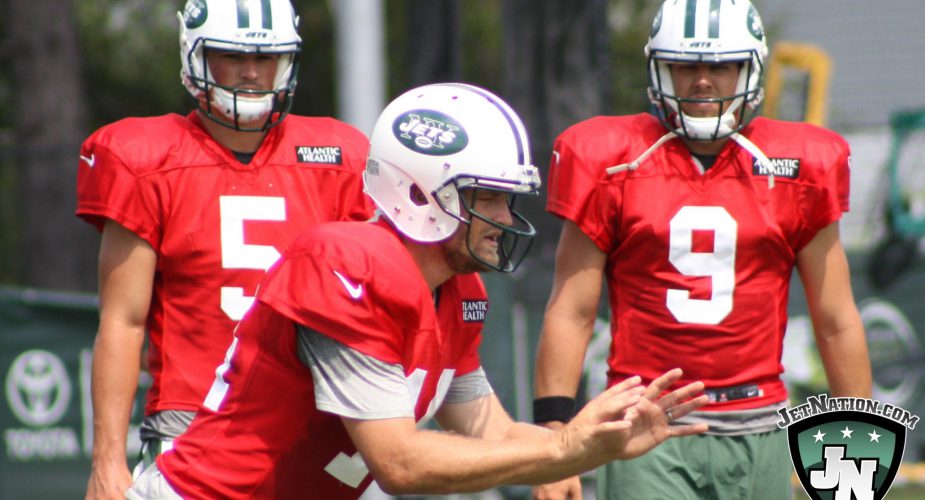 The weather let up just a bit yesterday at Florham Park as the Jets came out for their penultimate practice leading up to their second pre-season game on the road against the Washington Redskins this Friday night.

Perhaps the most surprising aspect of the session came in that quarterback Ryan Fitzpatrick was not only perfect in the early going, completing all of his passes through the first set of team drills (10-10 by my count), but that once Fitzpatrick started to misfire it came on a pair of long balls down the field that had a bit too much juice.

His first incomplete pass came on a go route to wide receiver Eric Decker who was roughly 60 yards down the field with a step on his man, Fitzpatrick’s pass fell to the ground, overthrown by several yards.   Just a few plays later it was to the opposite side of the field, on what would have been a 40(ish) yard completion, Fitzpatrick again overthrew his targeted receiver by several yards.

All in all, it was a good day for Fitzpatrick who threw several TD’s to just one interception during team periods when linebacker Erin Henderson picked him off along the right sideline.

While Fitzpatrick had a strong showing, the same couldn’t be said for Geno Smith who benefited from a pair of dropped interceptions (Ronald Martin and Rontez Miles) but still mishandled a pair of snaps and was reportedly seen slamming his helmet to the turf in frustration.

Smith did bounce back later on in the session, connecting on a pair of deep balls to either side of the field, but decreased reps meant fewer opportunities for Smith.

Rookie Christian Hackenberg saw a significant uptick in reps as he attempted 8 passes, most of which were on the mark against all levels of the defense.

Hack connects on a bomb with Jeremy Ross down left sideline.

Then of course there was Bryce Petty who once again got the majority of second-team snaps as the team continues to evaluate the Baylor product who is either fighting for  roster spot, or the back up job, depending on who you’re listening to nowadays.

In non-quarterback news, Muhammad Wilkerson was back and on the field on a limited basis while running back Matt Forte worked out during positional drills for the second day in a row but didn’t see any work during team periods.  Given Forte’s extensive pro resume, it’s clear that the Jets are happy to let him rest his balky hamstring as much as possible rather than run the risk of doing further damage as the season approaches.

Mike Catapano also flashed some of the pass rush ability we saw from him in limited action last year as he was able to come around the edge and pressure the passer on multiple plays.

Brandon Shell was also getting another look at left tackle as he did in the pre-season opener against Jacksonville but this could simply be a case of plugging in a body in a spot where one is needed.  Shell is largely viewed as a future prospect at right tackle or along the interior of the O-line moving forward.

The team will conduct their final practice before facing the Redskins this afternoon at Florham Park.