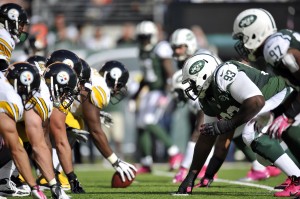 For a change, Quarterback wasn’t the problem. Unfortunately, it wasn’t the solution, either – as the team put up just 13 points. They were shut out in the 2nd half and have still only put up 7 points in 3rd quarters this season. An inability to punch the ball into the end-zone continued today, and while Fitz was largely efficient on paper, avoided the costly turnover and can blame some of his troubles on his receivers, but a number of throws were well off line.

The Jets finally ran Forte to the outside… and it resulted in a 28 yard rush. Why they insisted on pounding him up the middle for 4 straight games as if he was Chris Ivory, we may never know.

Marshall was his usual self: a few big plays, a few costly drops. 6 different receivers/tight ends caught a pass. That’s right: tight ends. The Jets finally had a tight end catch a pass! In fact, they had two tight ends catch at least 1 pass: Seferian-Jenkins and Bostick.

Brent Qvale struggled mightily, getting beaten on multiple plays. Mangold had some trouble with low snaps and later suffered a knee injury. Protection was adequate at times, but not often enough.

Williams and Richardson combined to force and recover a Big Ben fumble, only the 3rd turnover the Jets D has forced this year. Apart from the Bengals game, where has this unit been all season? They should be dominant, but they’re not taking over any games and they’re not helping the secondary out, either.

Teams don’t try to run on the Jets but then again, why should they? Despite everything we’ve heard about added speed at the position, Jets linebackers still can’t cover and still can’t rush the passer.

This was a dumpster fire before Revis was hurt, so it’s certainly not going to get any better with him on the bench. Once again, an opponent beat the secondary deep early as Big Ben threw to Coates for a 72 yard TD. Poor tackling, broken coverage and miscommunications persist and there is no silver lining.

Folk was 2/2, Edwards made several significant punts, though the Jets coverage team failed to down one of them within the 1 as they should have. The coverage team also gave up a big return, but fortunately Calvin Pryor finally managed to make a tackle and prevent a touchdown on that play.