Jets may Have a Steal in Butler 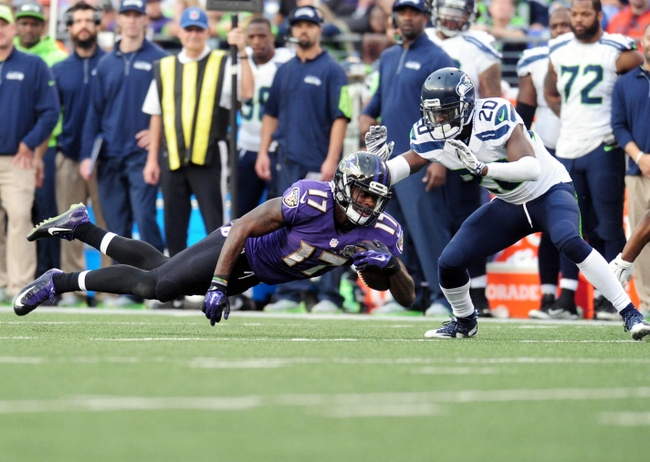 When the New York Jets were awarded former Baltimore Ravens and Tampa Bay Buccaneers wide receiver Jeremy Butler off of waivers, it barely made a ripple on social media.  Understandably so, as Butler can only be classified as a bottom of the roster player with little pro experience, joining a team with a backlog of young talented receivers whom Jets fans are anxious to see in action.

Charone Peake, Robby Anderson and Jalin Marshall have all shown flashes of being valuable contributors in both the near and distant future, but a look at Butler shows another receiver with some intriguing attributes.

An undrafted free agent out of Tennessee-Martin, Butler spent 2014 on injured reserve with a shoulder sprain that was likely a “stash” by the Ravens, who wanted more time to work with the small-school product who impressed early on in training camp.

Despite high praise for Butler early in year two, he initially failed to make the Ravens roster in.  According to ESPN.com, the receiver was still impressing  all the right people based on some excerpts from Ravens camp reports.

Dark horse to watch: Wide receiver Jeremy Butler. After spending his entire rookie season on injured reserve with a shoulder injury, Butler was among the biggest surprises this spring, catching nearly every pass thrown his way. His performance during the final minicamp was called “incredible” by Flacco and “unbelievable” by wide receivers coach Bobby Engram. Undrafted last year out of Tennessee-Martin, Butler has intriguing size at 6-foot-2, 218 pounds.

He may not have made the final roseter, but after a slew of injuries, Butler found himself not only on the roster, but as a regular contributor down the stretch who turned in some solid performances despite playing with middling quarterbacks Matt Schaub, Ryan Mallett and Jimmy Clausen when Joe Flacco was knocked out for the season after week 11.

In a total of eight contests, six of which were with Schaub, Mallett and Clausen under center, Butler hauled in 31 passes for 363 yards.  His best performance coming against the stingy Seattle Seahawks secondary Clausen’s first start of the season for Baltimore, pulling down 7 receptions for 72 yards.  Even still, a solid finish to the 2015 season and rave reviews weren’t enough to keep Butler around as the Ravens parted ways with him when wide receiver Brashad Perriman was healthy, and veteran Steve Smith was activated from the PUP list.

Butler soon landed with the Tampa Bay Buccaneers but lasted only a few weeks before he was waived by Tampa Bay and snatched up by the Jets.

In going back to watch all of his games from 2015, a few things about Butler jump out, the first being how the Ravens used him all over the formation.  With Eric Decker done for the season, Chan Gailey may be looking for another big-bodied receiver to operate out of the slot, a spot where Robby Anderson and Charone Peake may not be all that comfortable at this point.  Butler has shown he have some success doing that at the pro level.

The next thing that stood out were his hands.  Not just that they were very reliable as Butler caught just about everything that came his way, but he appeared to have great hand strength, sometimes plucking the ball out of the air and pulling it in to his body while fighting off a defender.

Butler also displayed impressive body control for a 6′ 2” receiver as he made several catches while off-balance due to errant throws, be it toward the sideline or at his feet.  Being able to pull down poorly thrown passes may be his most valuable attribute when looking at the top two spots on the Jets QB chart, but I digress.

Butler’s 40 time is about what you would expect from a 6′ 2” possession receiver as he hovers in the 4.5 range, but he will fight for extra yards and isn’t afraid to take a hit.

Trying to determine how Butler will fit in with the Jets is difficult for one major reason, and that’s the quarterback play.

Time and again, Butler made uncontested catches with little traffic around him, as Mark Trestman did a good job of freeing him up with plenty of room to work.  That enabled Butler show a tendency to find soft spots in zone coverage, settling in for several easy completions. Not a whole lot of that going on in Jets land over the past decade or two.

So while the immediate focus may be on the play of the three young guns who have been around since OTA’s, Butler is a player who may not be flying under the radar much longer.