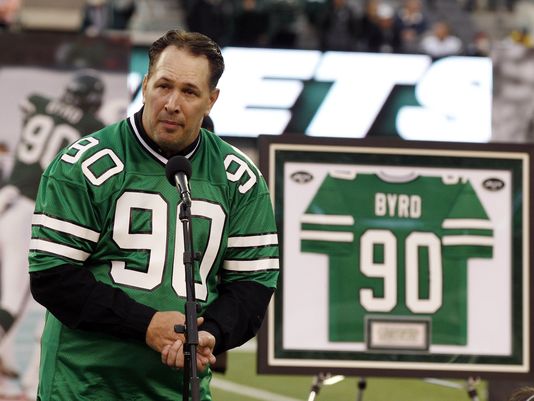 The crown of Byrd’s helmet slammed violently into Mersereau’s chest, fracturing a vertebrae in his neck, sending him tumbling motionless to the ground.  Paralyzing him from the waist down for what some believed would be forever.

It was the type of collision that should have been the last of its kind in any mans life.  Sadly for Byrd, it was not.

It is now being reported that Byrd, who celebrated his 50th birthday just a few weeks ago, was tragically killed when the 17-year old driver of an oncoming vehicle swerved into Byrd’s lane.  Officials pronounced Byrd dead at the scene.

A former 2nd round pick out of Tulsa, Byrd took the league by storm, racking up 27 sacks in his first three seasons as a pro, before suffering his horrific career-ending injury in the middle of season number four.

At the team’s 1993 home opener, Byrd inspired millions around the world, walking back on to the very same field on which he was injured, to the cheering and adulation not only of those in the building, but of anyone watching from home.  He was the portrait of hard work, faith and determination.