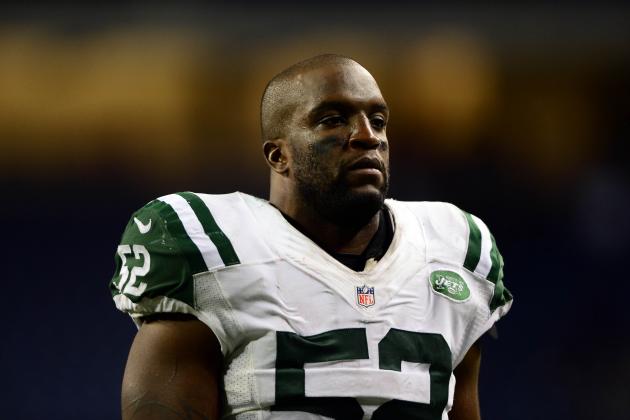 The streak comes to an end.

ILB David Harris is inactive for the first time since WK 13, 2008.@Revis24 & @nickmangold are up. #NYJvsAZ pic.twitter.com/JJuru3jxI8

For the first time since 2008, David Harris will miss a game for the New York Jets. The iron man’s streak will come to an end with Erin Henderson and Darron Lee starting at middle linebacker. The Jets will miss Harris’ stout tackling against the run up the middle. While Harris’ leadership will also be missed, his understudy, Darron Lee leads the team in tackles and could make an impact today. Newly acquired tight end Austin Seferian-Jenkins will sit out today after making his debut last week against the Pittsburgh Steelers. Seferian-Jenkins had two receptions for 17 yards against the Steelers. Nick Mangold and Darrelle Revis will be active for today’s game against the Arizona Cardinals.

Newly signed wide receiver Jeremy Butler will sit out today. With Eric Decker out for the rest of the season Butler may get a chance to get into the rotation at wide receiver next week. Jalin Marshall returns this week largely as a kick/punt returner.

Cornerback Nick Marshall, who was also signed last week, will sit out. Marshall and Butler are still learning the playbook and getting adjusted to their new team. If the secondary struggles/injuries continue Marshall could see the field as early as next week.

Brandon Shell returns to the inactives list after a brief one-week hiatus. With Brian Winters back in the lineup Shell becomes expendable.

Bryce Petty and Christian Hackenberg remain on the inactives list. Bryce Petty returned to practice this past week, taking reps with the scouting team. Rookie Christian Hackenberg mentioned that he benefited from increased reps with Petty sitting out due to his shoulder injury. Jets fans will be hoping that both quarterbacks remain on the inactives list for the rest of the season.

The Jets will be wearing a #90 decal on their helmets in honor of Dennis Byrd, a former Jets defensive end who played from 1989 to 1992. He was famous for overcoming a neck injury that ended his football career, Byrd learned to walk again after doctors told him he would never be able to. Byrd died in a car accident on Saturday. The Jets would be wise to use Byrd as an inspiration once again in a crucial game that could decide their fate this season.