The Jets and Cardinals are just a few hours away from kickoff in Arizona with a few developments and match-ups worth taking a close look at as game time approaches.

Well the “Hit Man” be Hitless?- Listed as doubtful with a hamstring injury, inside linebacker David Harris is in danger of missing his first game since 2008.  If unable to go, Erin Henderson and Darron Lee should get the nod in the middle, with Bruce Carter possibly seeing increased reps.

Who catches on with Decker Down?-  As we all know, wide receiver Eric Decker is done for the remainder of the season which means somebody else is going to have to step up and make plays.  Quincy Enunwa becomes the number two receiver with rookies Robby Anderson, Jalin Marshall and Charone Peake attempting to make a name for themselves. 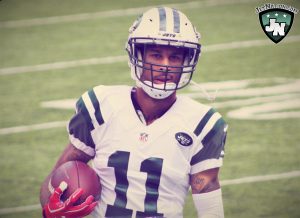 WR Robby Anderson should have a chance to make plays as a 3rd or 4th option.

If active, don’t sleep on newly acquired wide receiver Jeremy Butler or H-back/TE Bradeon Bowman.  With Enunwa seeing less time as the H-back, Bowman saw increased reps against the Seahawks two weeks ago before missing last week’s loss to the Steelers with a knee injury. While nowhere near as fast as Enunwa, he has a similar aggressiveness as a blocker in the run game and displayed good hands at the collegiate level.

How does Fitz avoid the picks?  Ryan Fitzpatrick has been one of the NFL’s worst quarterbacks this season, leading the league with a whopping TEN interceptions.  In facing the Cardinals, it’s another secondary with some of the league’s best playmakers, namely defensive backs Patrick Peterson and Tyrann Mathieu.

Will Todd Bowles apply pressure, under pressure?  Todd Bowles is desperate for a win.  His team in on the verge of being realistically eliminated from the playoffs (if they haven’t been already), and his secondary is arguably the worst in the NFL.  The Jets haven’t done much blitzing this season with their leaky secondary, but it’s not as if things can get much worse.  Is it time for Bowles to go back to what got him hired in the first place when he was a “mad scientist”?  When he blitzed more than any defensive coordinator in the NFL?  If not now, then when?

Carson Palmer is the least mobile quarterback the Jets have faced this season and the first since Andy Dalton in week 1 when the Jets defense picked up 7 sacks.

There’s absolutely no reason in the world why the Jets should win this game.  On the road, flying out west, bottom of the league offense and defense.  My heart says Jets harass Palmer all day, force some turnovers, and pull out a 24-21 win.

It could be worse, but Todd Bowles’ dear friend Bruce Arians calls off the dogs late in the 3rd quarter to avoid further humiliating Bowles.